As I mentioned earlier, I bought my action camera (ie the Faux Pro as I call it), specifically with a snorkeling trip in mind. Reality is I bought it sort of last minute — just a couple of days before we left for the trip. 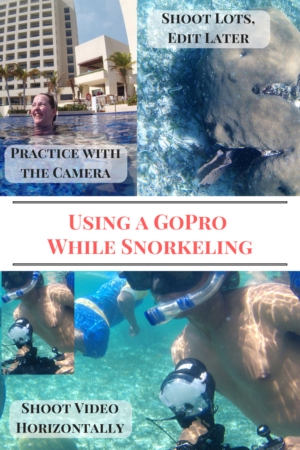 I didn’t know what I was doing at all so I decided I had to plan out getting to know the camera a bit and think about its use. And while I have some great video of the snorkeling trip to show for thinking through some of it in advance, I also know the next trip will be better because I’ve learned from some mistakes.

Before the Snorkeling Trip

Have you ever been somewhere and someone is trying to figure out a new camera? They ask various people around them if they know how to do this or that? Well, I don’t like risking things on who may be along and who may know what to do. And I really wanted to be able to focus on and enjoy snorkeling rather than have my mind totally preoccupied by a camera! So that means the pre-snorkeling time was put to some use. Here are some of the things I did:

Tips for You While Snorkeling

This is an area I could have used a bit more thought ahead on! So I’m going to share some of my success points as well as some of the things I want to remember to change for next time.

How else should I use my FauxPro?