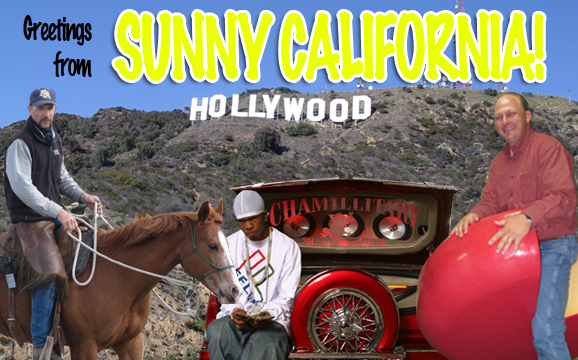 It sounds like the start to a joke “so a rapper and a couple of farmers walk into this bar” and believe me, the image causes me to laugh so much that I asked my dear friend Kelly to bring it to life through PhotoShop. But it could really happen and be great!  No, I most certainly did not do any psychedelic drugs this weekend. And I do not have I fever. And I’ve previously read Jeff Pulver’s blog without such side effects. For all these reasons, I think what I’ve read must be happening.

Below is the link to the post on Jeff’s blog that I read today. As I read through the blog post a few names and images jumped out at me.

There are 82+ interesting, smart, insightful, talented and otherwise amazing people who will be speaking at #140conf LA on October 4th and 5th.

So if you read my blog very often you should recognize a couple of names of that blog post — my good friends and AgChat Foundation founders Jeff Fowle (Twitter & blog) and Ray Prock (Twitter & blog).  Some of the names that gets my attention are Kevin Pollock (I’ve loved so many of his movies!), Sinbad (standup is awesome, also still think of the sitcom “A Different World”) but the one that really grabs me is Chamillionaire (Twitter & website).

Okay, I know some of the farm peeps who read my blog will be asking who? Chamillionaire is a Grammy-winning rapper, maybe more of an urban artist I guess, not sure how he’d describe himself. His song “Ridin‘” is how I found him years ago (remember I am a Memphian and I love a wide range of music. And yes, I’ve been known to wear my hoodie so it covers my face and I always have my music loud when I drive though I doubt anyone would ever mistake me for gansta). I learned in elementary school stereotypes don’t always fit though and as with many rappers, there is a lot more behind Chamillionaire than any stereotype would allow.

And if you are willing to go beyond the stereotype and  read a bit more about him like this article from the Stanford paper), you’ll see he’s really into telling his story and connecting people. I really liked this video of him talking with Los Angeles Times as he talks about what he tweets, how people react to see he’s well-spoken and whether he fits the techie stereotype. I love his answer to being asked if he considered himself a geek? “Not necessarily man, I just think, you know, knowledge makes the world go round man so if that makes me a geek, then cool you know?”

The reality is many of the questions posed to Chamillionaire have been posed to farmers who are active in the social media and they face some of the same sorts of pre-conceived notions of not being tech saavy as rappers do.

So to me this represents exactly the sort of brilliance that social media enables!

People who one would never picture in the same place or talking about similar topics, do just that! Twitter allows us all to connect as people, not as stereotypes and not as numbers. But there is a sharing that goes on through social media that didn’t exist before. And yes, it is engaging people as diverse as a rapper and a couple of farmers in an event that talks about the real power of people using technology to connect.

I mean granted these guys may not have shared tastes in music (though they may!) but I’m sure there is common ground for them. Maybe Jeff or Ray is a Kobe fan too. Or maybe they can talk about Droid applications or…. the options are endless. You can hear Ray & Jeff talk Twitter here.