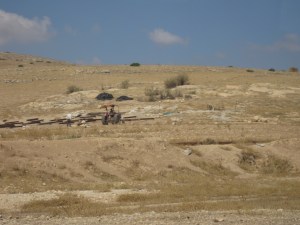 Recently, I wrote a blog post about the great agricultural production regions in central & northern Israel, we left those places and headed south along the eastern edge of the country along the Jordan River. The landscape changed dramatically as we went south.

We were lucky to have a guide had pointed out that the changes in altitude would be fairly dramatic. And of course he was right! When we left Tiberias, Hillel (our awesome guide & a distinguished archaeologist) told us we were 200 meters below sea level but would be traveling down to the Dead Sea which is 400 below and then we’d turn and climb back up to Jerusalem — Mount of Olives there is more than 800 meters ABOVE sea level!  I wasn’t sure what the change would mean. It was already so hot I felt I was likely to evaporate and yet we were just getting started to go in a desert!

As we drove into the West Bank, Hillel pointed out a few stats that this numbers-phobe had to put into my iPad to keep handy! 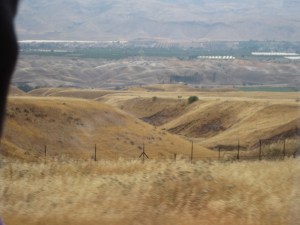 West Bank in the foreground, Jordan in the distance

I have to admit feeling a bit dumb when I realized for the first time that “the West Bank” refers to the western bank of the Jordan River. Yeah, I wasn’t proud but somehow I was so excited to be seeing something so different I am fine with admitting my lack of world knowledge. We began to see VERY LITTLE green vegetation, it was getting drier as we dropped further down.

While the Jordan is nowhere near as big as my local river (the Mississippi), it is clearly a geographically important body of water. Looking across the Jordan, you frequently noticed more green. Hillel pointed out that it was because the eastern bank’s elevation is higher so it gets more rain. Yes, he was saying rain water really did evaporate before it reached the low altitudes we were at!

An estimated 80 percent of Jordan’s food production comes from the Jordan Valley. On the West Bank, we no longer see cattle but rather see sheep & goats and the numbers get fewer as we go. This is the historic Palestine. The topography includes the Samarian mountains which involves a lot of caves. You see very few farms or buildings of any kinds. (On a Biblical note, the people who lived in the mountains “The Samaritans” were very hostile to the Jews so Jews would walk around the mountains rather than try to cross them but that’s what people from Galilee did to go to Jerusalem. It made the trip many days longer traveling. It was also in this desert where Jesus spent his 40 days & 40 nights. ) 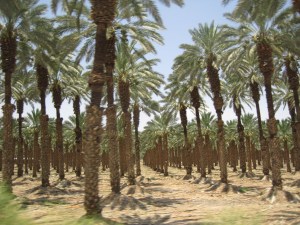 I found myself so surprised by the landscape that “wow” was used in a lot of messages sent home that day. It was so freaking desolate. And then, on occasion, you’d suddenly see the impact of irrigation with grapes growing or maybe lines and lines of palm trees growing date palms for the fresh market.

In the midst of this desert is Jericho. It is a town we’ve always heard of because it was an oasis of sorts in the desert because there was water. It is a Palestinian city, many are farmers. From a Biblical standpoint, this was the place where Herrod had a palace where he died. The mountain of temptations is here but in agricultural speak, these mountains & the desert also are home to potash quarries too.

Other posts on my recent vacation to Israel include: