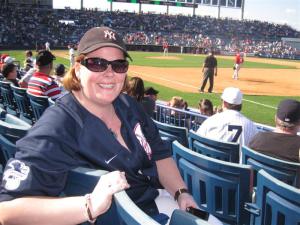 Yesterday I spent the afternoon with the boys of summer. It was incredible! After this winter’s snowed in adventures in Atlanta and St. Louis, along with all the other crappy weather that simply made traveling harder, I think that the mid-80 degree day was truly a gift from God. It’s amazing how clear my head became thanks to yelling for Mark Texeira when he hit a homerun to center field and singing “Take Me Out to the Ballgame” so loudly (yes, I made it to the jumbotron 🙂 ). All I could think of was being in the moment and sharing a bit of that through social media and texts to my nephew.

On the 2-hour drive back to my hotel (which was filled with Red Sox fans in an irony that still overpowers me), I enjoyed the sunset over the Gulf of Mexico and other wanderings of my mind. Halfway into the drive, I got back into the area we had visited farmers on Friday. And yes, that triggered some thoughts that I think are perfect for this blog. It’s a little vocabulary, a little definition and a little perspective:

If you haven’t guessed yet, I do love baseball! Special thanks to Kathleen for telling me weeks ago camps would be open while I was down here — it resulted in a bucket list item with a check box. And I may have to come back.

What other baseball terms do you think may have an interesting ag connection?