The fact is that ten years ago, world events changed the way I will forever hear the words “September 11th” or the number “9/11.”  Like most adult Americans at the time, I can vividly remember where I was, who I was with that day and how I felt. And while I was glad to share my personal recollections of September 11 last year, I feel absolutely honored to share my dear friend Drew’s recollection of what tore his neighborhood apart 10 years ago as well as what has happened in TriBeCa since as the neighborhood has revitalized.

If you don’t mind, I want to explain a bit. Drew and I have been friends since elementary school because we went to summer camp together. I have no idea how we moved from that to live long friends, but I remember when he was in college at Northwestern. We were stunned when he met someone who went to the same tiny Oklahoma university I went to. I went to visit when he lived in Los Angeles for a while. He was thrilled when I decided to take a job in New York. And we were both a bit bummed when we just missed each other as I moved to Mississippi and he moved to New York.

I had the chance to visit him when I went to New York for an investor’s conference at the World Trade Center Marriott. We had a great chance to catch up because his apartment was just a few blocks away. We went to a great Indian restaurant that was close by to eat. I remember thinking the neighborhood was oddly quiet but that Drew’s apartment building was one of the coolest places I’d ever been to! From his apartment, he had an INCREDIBLE view of the World Trade Center Towers. Drew explained that TriBeCa was building its residential community and things that support it because otherwise lower Manhattan had been mostly business. 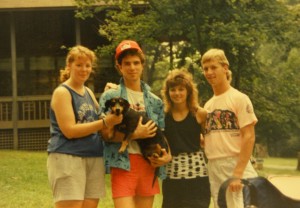 In the years Drew and I have known each other, there have been countless visits, letters, phone calls and emails. We shared some of our greatest accomplishments and shared heartbreaking losses as Drew’s mom and my dad died far too early and a beloved friend had a terrible accident. But nothing prepared me for the emotion we faced not knowing where Drew was on September 11. Nobody had ever told me that area codes could be out of order for hours that turned into days. But we were lucky enough to find Drew safe and sound when he finally was able to email us that he was staying with friends. A little while later, he was able to return to his apartment. When he did, he wrote this incredible essay.

The View from Ground One – “September”

Last night I sat mesmerized behind a pair of binoculars for over an hour, observing an excavator dislodge a twenty-foot steel beam from the wreckage of One World Trade Center. The beam was wedged precariously between the partially-collapsed Six World Trade Center and a mound of rubble. What struck me was how gingerly the excavator handled the beam. Its wide jaws, directed by a long, agile boom, nibbled and nudged and tugged at its prey from various angles. One false move could have triggered an avalanche of steel scrap and glass shards, to the detriment of the search and rescue crew, the missing, the crime-scene evidence, and the structural integrity of surrounding buildings. At last, the excavator successfully removed the beam and placed it in a truck full of debris.

A delicate operation is underway in lower Manhattan, and a unique community has sprung up overnight to support it. McDonald’s has come out of doors and set up a feeding station for hungry workers. A school playground is now a massage parlor, where New York’s best-trained hands knead the taut, overworked muscles of men and women who refuse to go home. Starbucks is teeming with customers clad in uniform-blue, fatigues, work boots and oxygen masks. Where are the laptops and backpacks, the legal pads and fountain pens? Will the café’s mauve-colored furniture ever be the same again?

A resident here is apt to feel a certain privilege, walking on streets limited mostly to representatives of organizations like FEMA, FDNY and NYPD. The loud drone of generators and the Rent-a-Fence-lined sidewalks magnify the civilian’s sense of privileged access, as do the huddles of guards one must pass through to get home. “I had to show my I.D. to THREE sets of guards,” a resident said. As hard as she tried to sound put-out, her face betrayed a smug satisfaction with the high-level security assigned to her neighborhood.

From the street patrollers to the crane operators, the different elements of this emergency community inspire a new appreciation for the human capacity to cooperate. However miserably our bureaucratic agencies may have failed us on September 11th, it is clear that our many civic, political and private organizations are now uniting to heal the gaping wound left in our city and psyche. And the cooperative spirit has rippled out to the unlikeliest of channels: even customer service representatives I’ve spoken to on the phone this week have demonstrated some humanity (surely that won’t last). When people are made to feel useful, their bounty knows no limit. They are quick to act. (Read more on the 9/11 Memorial Museum’s national registry for artists.) 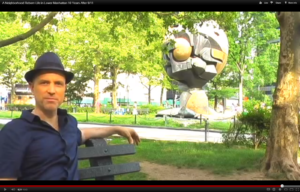 The reason I really wanted to post all of this is the other day Drew sent several friends an invite to the 9/11 registry where we also had a chance to see a video that briefly touches on TriBeCa memories of 9/11/2001 but then focuses on what’s happening in TriBeCa today. The video is so uplifting! The fact that Drew had it right when he said “When people are made to feel useful, their bounty knows no limit. They are quick to act.” Makes me want to help you seal these images into your mind. While I know the images of planes crashing into the World Trade Center will never leave my mind, I want to balance it with the images Drew sees living there: