The idea for a recent poll and blog post came to me on a very long visit to the post office. I felt like I was there hours. In fact, nobody has proven I wasn’t. I had to leave and come back. In all the confusion, the person working the counter swore she had gotten me the package I had come to pick up. She hadn’t. I forced the issue and finally a check to the back found my package. Let me tell you what happened.

The postal employee came toward me with a box that had to weigh 10 pounds! And as she walked, there was a distinctive rustling in the box. All the folks in the place, employees & patrons, had their eyes darting between the box, the carrier and me (the recipient). Another employee said something about I was picking up “that” package!

The one bringing me the box asked what was in it and I said popcorn. My answer was greeted with gusto! There had been discussions on the very topic. (Somewhere along the way a tiny whole in the box had allowed a kernel or two to drop.)  They next question was the obvious one – “where’s it from?”

Living where I do, I knew what the expected. They anticipated a brand or store name however, I’d buck the system and say “a friend of mine who farms grew it and sent some to me.”  That friend — Ryan Weeks (blog, Facebook & Twitter) — sent it as a thank you for some help I was able to offer him. He had mentioned he was sending some but I had no idea it would be so much!

The folks in the post office were STUNNED that I could know a popcorn farmer. There was a crowd there, several behind the desk and a BUNCH in line. I felt all of them looking as I picked up the box to turn. 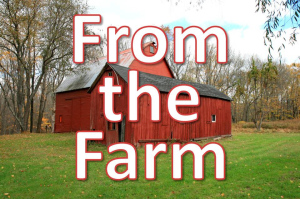 That’s when the next question came…. “What do you mean it came from a farmer?” I had to sit the box down (it truly was heavy!) And explained, “Well, my friend Ryan has a farm in Nebraska and he grows both corn & popcorn.’ Eyes of amazement stared back. “I was able to help him with something so he sent me some popcorn as a thank you. Its good to have friends who farm.”

The next question, I didn’t anticipate. “What do you mean? How does he make it pop? Did he put chemicals on it?”

“Well, no. Popcorn is a different kind of corn plant that other kinds of corn. The way the plant produces it is what makes it pop in oil or with hot air.” All I got as a reply was “seriously?” I nodded saying yes and headed out cause I needed to enjoy an afternoon snack.

As I headed home… that was when I started thinking about all of the folks who eat popcorn so often without thinking about where it came from. So I started thinking blog. I have to admit to assuming popcorn would win the recent poll on favorite movie snack. I love popcorn. While the snack poll included salty and sweet snacks, you can get both with popcorn! Salted with butter, kettle, cheesy, caramel, etc – however it comes YUM!

And for the foreseeable future, my family will be thinking about Ryan & his family as we sit down to be entertained. The photos show lots of popcorn. I think I’ll have to share some and tell more tales of the snack with some others. And if you’d like to, you can buy some raised in Ryan’s part of the world at http://www.preferredpopcorn.com — Ryan grows some as do Zach & Brandon Hunnicutt. 🙂

Here’s one of the first videos Ryan did…. his daughter captured my heart and I can’t imagine the post without Bren.

If you have questions about popcorn, please feel free to ask. I’ll try to get Ryan, Zach, Brandon or some other experts to answer them! I also recommend you check out Ryan’s blog, Facebook & Twitter. Farmers rock!

0 shares
« Thoughts on Avoid “Bristle Words” | Bob Burg
It is official! The iPad has put the smackdown on my netbook! »