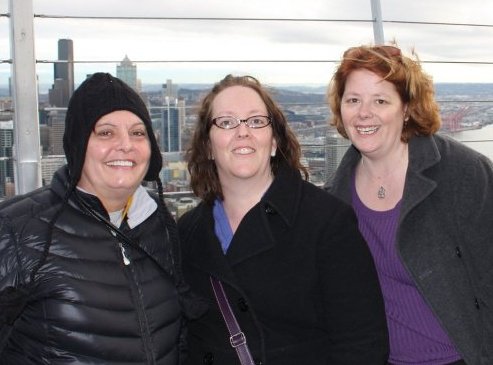 I think my lunch last Saturday would almost seem stereotypical for Seattle and yet the day was a tad surreal.

My sister Cheryl works for a Seattle-based computer firm.  She spends a good bit of time in the fine city.  Her crowd of friends includes programmers, project managers, etc.  When she found out I’d be coming to Seattle, she said she wanted me to meet her friends.  I’ve heard about some of these folks SO MANY times.  I know a lot of stories about their travels and let me tell you, she has great friends.

In computer tech, particularly programming, the stereotype is that there will be Indians involved.  And Cheryl has great friends who fit this stereotype so we ate lunch at a local Indian restaurant.  A perfect fit for me because I LOVE Indian food!  (Wish I had carried my camera inside cause I would like to remember some of those faces.  Great people!  And the food… quite yummy.)

We had a great time chatting about various places in India, the incredible food, friends at the table, funny stories of travel, etc.  There was a big group at the table next to us that included some incredibly cute kids.  Life-long friend Debra and I enjoyed the lunch and convo but were really excited to head downtown for a bit of sightseeing in the 40-50 degree weather that felt like a heat-wave compared to home!

That’s where the crowd and the suitable stereotypes turned to my reason for being in Seattle.  The Farm Bureau’s annual meeting.  As we waited in line to go up in the Space Needle (something Cheryl, Debra and I had never done) I spotted some of my peeps.  Okay, these weren’t people I could call by name, but the John Deere cap and the jacket from a major landgrant told me everything I needed to know.

These were indeed my people…. farmers or someone who worked with farmers.

When we reached the top of the Space Needle, I took a few photos and really wanted one of Cheryl, Debra & me.  Seemed like I needed to introduce myself to someone who could snap the photo…  the farmers who liked Virginia Tech were the likely place to start. The fact that they asked how I knew they were farmers even made them laugh when I said how easy it had been.   Josh was glad to help out.  That photo at top is the one he took for us!  We visited a bit.  They were all from northern Virginia near the mountains.  Hay, livestock, some row crops.  Nice guys.  We had a chance to visit in the trade show too in the coming days!

By the time we had gone a quarter of the way around, I was introducing myself to a husband & wife from Indiana.  It was the logo on his jacket that caught my eye.  They grow soybeans that produce oils that allow us to avoid the transfat issues that people have raised flags and created regulations over.  I told him I appreciated his business and he asked me what I did at the company.  We had a nice visit too!

The surreal part of the day came as we headed to dinner.  It was my turn to introduce Cheryl & Debra to some of the peeps I know well.  Interesting that I’ve known one of them for more than 15 years, some of the others I’d only known through twitter for the last several months — all were old friends cause we share agriculture as a core.

We met a couple of the guys at a restaurant out on Pier 57 (I think that’s it).  You can see a bit of the night on a previous post.

But what was interesting, was as we watched ferries come and go.  Conversations were about technology, different programs, websites, etc.  and about different crops.  We joked about how much time farmers were spending talking about that stuff and Cheryl said (by memory).  “Just cause you’re farmers doesn’t mean you don’t understand and use technology.”  It was the kind of thing that made Jeff grab his phone saying that was tweetable for sure.  LOL.

The reality is, as the night’s conversations wandered, technology seemed to be everywhere.  There was the twitter stuff that was probably close to overkill to the non-twittering folks at the table.  I say this not cause my sister pushed back, but I think a guy from California’s SJV was totally blown away.  Debra had to update her Facebook and Cheryl’s heard most of the twitterness before — just not from so many voices!  Technology was at the table in other ways too though — how the hay is produced for the cattle and what goes into the breeding programs.

So the only stereotypes at dinner may have only been the cowboy hat and baseball cap.  They weren’t the laid back farmers you may picture in front of a house posing for a picture with a pitchfork. They will use the pitchfork, don’t get me wrong, but this farmer crowd was submersed in technology and determining what they needed to move their operations forward — whether that be crops, livestock or in getting their message out.

A few photos from the Space Needle (click on the thumbnail to see high res version):