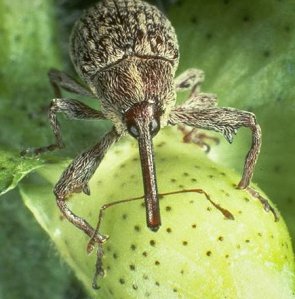 The boll weevil is one of those pests that achieved legendary status for the path of destruction it left in its wake. And to my mind’s eye, its one of the few pests to achieve such notoriety specifically for the impact on crop production and the impending doom it caused society. I would guess it ranks fairly close to the potato blight imposed Irish potato famine in terms of notoriety. But its amazing how little people actually know about the bug!

Thanks to the coordinated grassroots efforts of cotton farmers and the industry, we have virtually eradicated this pest, sending them back to their native Central American homes!

In fact, we’ve been so successful we get actually counts of weevils caught in different geographies. And for years one of the questions I got most frequently about cotton came from people driving through the Mississippi Delta wondering what the green things were, some suggested they were hummingbird feeders but they were weevil traps to see if there were changes in the boll weevil populations.

Well, it’s March and everyone is already looking at this year’s boll weevil forecast so you may want to read this from the Farm Press:

The hard freeze that extended well into Mexico in early February, along with an aggressive approach by the Texas Boll Weevil Eradication Foundation, Inc., and cotton farmers’ strong commitment to stalk destruction last fall put Texas a big step closer to eliminating the boll weevil as an economic pest across the state.

“Early February was the first time since 1983 that a hard freeze extended 80 miles south of the Rio Grande,” said Larry Smith, program director, Texas Boll Weevil Eradication Foundation, Inc. “That will help with eradication across Texas.”

Smith, speaking to the annual Blacklands Income Growth Conference recently in Waco, said the program is working and has just a bit further to go before “we work our way out of a job.”

He said few weevils were caught in the Western part of the state last year on more than 5 million acres of cotton. “We’re making great progress. We now have less than 600 employees, down from 2,600 when we first started. And farmers are making good crops.”

He said yields have improved by some 200 pounds per acre since the program started. “Part of that increase is because of boll weevil eradication and part is improved varieties,” he said

My guess is we won’t have much reason to sing the Boll Weevil blues other than we like Brooks Benton, Eddie Cochran or the White Stripes. Here are two very different versions of the tune, which do you like best?