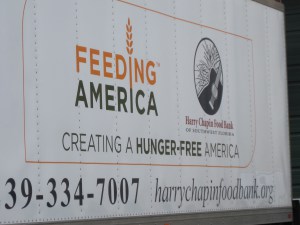 When was the last time you went to a food bank? Well, I have to admit that I don’t do it often enough. The morning after one of our conferences, several friends and I, all members of the Ag Relations Council, spent several hours at the Harry Chapin Food Bank in Fort Myers, Florida. Its taken me far longer to get this blog post up, but I kept thinking I didn’t want to short-change the food bank.

This was the first time I’d flown into Fort Myers. I was there for a conference but most of the people on the plane were heading down on vacation. The area draws tourists for Major League Baseball spring training camps, fishing expeditions, beautiful beaches and more. And while the area may have a lavish appearance to tourists, hunger has a home everywhere.

The food bank’s website does a great job explaining the situation:

The current economic environment has resulted in an increased number of those in need of emergency food. Most of these increases are directly attributable to the housing slump and the corresponding surge in unemployment. In fact, Lee County has been cited in the New York Times and elsewhere as the hardest hit of any U.S. county by the housing/mortgage crisis. According to a recent article by CNN.com/US (2009, February 23), Lee County, Florida, is one of the hardest-hit areas in the country and presents a microcosm of the national housing dilemma. With home prices down about 50 percent from their peak and unemployment now at 10 percent, the area is littered with “For Sale” and “Auction” signs. The increase in demand has been accompanied by a significant shift in the demographic profile of those being served by the emergency food system. The emergency food programs are seeing more and more families that have never previously had to ask for charitable assistance. The impact of the economy on livable wage construction jobs has been devastating. More and more of these families, many of whom were food drive donors in the past, are being forced to ask for aid.

Fresh Food for the Hungry 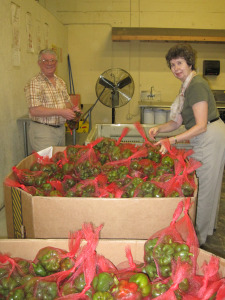 When we volunteered to spend several hours there, I pictured us doing something like sorting canned foods onto shelves or packing boxes or something. I didn’t picture us going through huge bins of bell peppers sorting bad out and packaging good into manageable bags. But then I guess the beauty of being surrounded by all the great fresh vegetables is that there could be some available for charity too.

So I had the chance to learn a lot! For instance:

We got a tour of the facility and then got pointers on our job — sorting through produce that mad been delivered in huge bins. We pulled the good ones out and put them in small bags for delivery to people. I could see stuffed peppers, spaghetti sauces and more being cooked up in some of these places!

This video below will give you a better feel for the day. And I’d love to hear whether you’ve taken chances to do similar projects at food banks.