If Charleston hasn’t officially been named one of America’s top food cities, it is just because the people of Charleston didn’t want any more people charging into their city and filling up the reservation logs at so many incredible restaurants. But what strikes me in such a major way is that great food isn’t for the elite restaurants in Charleston. In fact, great food is everywhere. For that reason, I figured months ago it would be easy to find a good couple of bloggers who write about food. 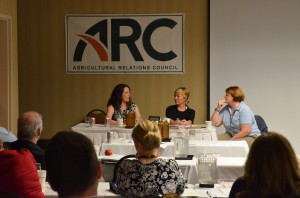 There aren’t fantastic directories for bloggers but I played around and found several that held potential. I’m still not sure how I found or decided on the couple of bloggers I did, but can’t imagine I could have possibly found two other bloggers who would have been more engaged or interested in the conversation about communicating and learning about food through social media.

So who did we meet that likes to talk and write about food,  and what did we talk about?

Food is a topic that gets lots of attention in the blogosphere. With that, there is a very wide range of people who talk about food on their blogs. Some are running several different directions doing what they need to balance family, work and home and others have an incredible passion around food and would rather spend their days picking out the perfect ingredients and trying new combinations of them. Rather than focus on just one kind of blogger who features food, we showed some of the spectrum. Little did I know when I was contacting these folks that the two we would have join us would be close friends!

Rebeccah Connelly (seated in the photo below) is in the part of the scale that I think most of us identify with most closely. She likes food, wants to make good choices, but also has a million other things going on. Her blogs showcase some of the other things she has going — and the fact she has blogs rather than a blog can tell you a bit about that! Rebeccah’s “mom blog” or personal blog — Connelly Confusion — says “you’ve got to know when to hold them, know when to fold them, know when to walk away and know when to run.” How appropriate is that to the lives most of us lead? Well, in case that isn’t enough of a description for you to get a good feel for Rebeccah… Although she grew up in a more urban/suburban world, she remembers vividly the trips back to a family farm in Tennessee to see the grandparents, etc. With that, she seemed to have an excitement for agriculture that mixed with her love of reading could make for a great combination! Oh, and don’t let me forget her other blog. She’s a sports fan — specifically the South Carolina Gamecocks fan. Yep, she has a blog that’s about sports and tailgating called Gameday Goodness — how Southern is that? 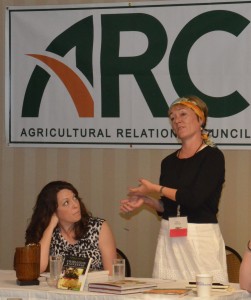 Holly Herrick is a lot like my friend Karen, I just didn’t know how much alike they were until I met them. Holly is incredibly passionate about food. She’s built her career around it as a former food reporter for a local newspaper. She’s not doing the daily paper thing anymore but she’s seemingly one-upped it if you ask me. She spends her days developing and testing new recipes. She writes about them, posts great photos, etc on her foodie blog Charleston Chow and packages things into cookbooks as well. You can find out more about her cookbooks on her website HollyHerrick.com. Holly is the kind of cook I’d love to live next door to. She loves cooking with the freshest ingredients, whatever is in season at the time. I bought her Southern Farmers Market Cookbook so I can see some of the ways she has come up with to fix them.

The Discussion – What I Learned

There are a couple of things it seemed everyone agreed on. We all want to have real choices and good information from which to make those choices. And there are a lot of voices out there talking about food — some are genuine and some are agenda driven — so its better to read more & seek divergent opinions, especially if you hear something that “pushes your buttons.”

There were a few things that I just had popping around in my head too, some of them raised in the discussion we had:

Its amazing what kind of awesome people you can find by Googling for bloggers in a given area and the honest kinds of discussion you can advance. For me, it was a great experience. I met a couple of women that I will be touching base with online now and then…. but I’d also love to see them in real life again as well. Of course, I’m always up for a visit to Charleston…. I can almost taste the She Crab soup now.

What have you learned by talking to people with shared interests but different backgrounds or experiences?

The photos in this post are from the awesome Flicker feed of Chuck Zimmerman and ZimmComm with permission.

0 shares
« Opening Day in St. Louis for Baseball & Farmers Market
Why Do So Many Farmers Like Country Music? Why Don’t More Farmers Like Rap? »