When I was really little, our next door neighbor had a pomegranate tree that grew right along the property line. Its probably what set me down the path to loving this fruit that so many in the U.S. have found to be so strange for years. However, recently, more and more people are finding out the benefits of eating pomegranates or drinking pomegranate juice. 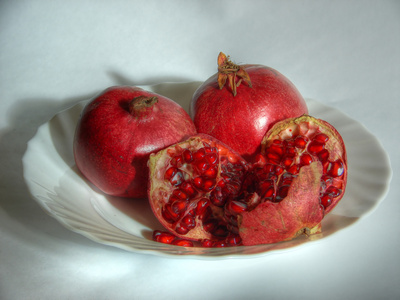 I looked around the net a little bit and found this post on the LiveStrong site that highlights a few key health benefits associated with pomegranates:

With a list like that, its easy to see why more people are taking note of this fruit that Greek mythology and current culture continue to place a good bit of importance with. In fact, some Greek friends brought me a silver pomegranate when I bought my first home as a abundance and good luck.

What prompted all my thoughts of this odd fruit considered by many scholars to be the forbidden fruit in the Garden of Eden that tempted Adam & Eve? Well, for one thing, my niece bought a couple at the grocery store but the following article in the Western Farm Press really set me to thinking!

San Joaquin Valley pomegranate production has reached 30,000 acres, doubling from 2006 to 2009, and is expected to continue growing. Pomegranates reportedly use about a third of the water almonds and grapes need to produce a crop, a fact not lost on California farmers struggling to cope with less available water.

The latest twist in the California pomegranate story is a patented, proprietary variety discovered in Tulare County.

It is called Angel Red. This is its first season for a significant harvest. Licensed growers, packers and marketers are expected to ship 30,000 boxes of the premium, soft-seeded pomegranate to market this season. (Most pomegranate varieties are hard-seeded.) Most of the 2010 Angel Red crop will go to Japan, a growing and discerning market for the California premium, bright red fruit.

Recently, pomegranates have also been identified as a functional food in Asia where women appreciate them as a health and beauty food, just like in the U.S.

A wide range of pomegranate products have been launched throughout Asia, and pomegranate juice is rapidly gaining popularity, paralleling its ascent in the U.S.

Greg Smith, Tulare County, Calif., farmer, discovered the Angel Red pomegranate variety on one of his farms. He patented it as Smith Pomegranate and then copyrighted the name Angel Red. There are about 1,700 acres planted to Angel Red, mostly in the San Joaquin Valley. Many of the trees are less than four years old.

There are a few things I have to mention after I read that article:

What I really love about the idea of the Angel Red variety of pomegranate is it will fit a unique use for this healthy fruit. With that, I think I’ll go get me a Wonderful pomegranate or two for weekend snacks…. maybe picking up some POM juice too!