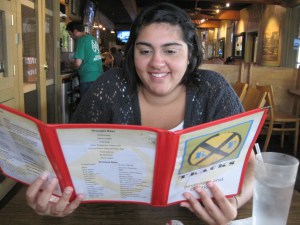 Last weekend, my niece’s college roommate, Purvi, visited Memphis for the first time. As you can imagine, Alicia was pumped about Purvi’s visit and the two of them were up for anything. We got a bit of sight-seeing in, visited family and of course ate. A LOT. Since she’s vegetarian, we had a chance to see whether some of our favorite restaurants would stand up to the challenge of a life-long vegetarian’s scrutiny. Living in Midtown, most of our local restaurants have a vegetarian option or two — we both are known to go vegetarian now and then. But with  or 6 days, would it be easy enough to stop along the way and find a place we’d all enjoy for lunch or dinner? Well there were several things that got notice.

But the biggest challenge waited til Purvi’s last night in town — could we get her some Memphis barbecue? I’m sure a few of you remember the great barbecue debate of 2010 (a couple of you try to resurrect it now and then but Memphis barbecue is the best)! You know, that smoky flavor that greets people as they land in the airport or drive around the city. Would we have a way to get that for her? 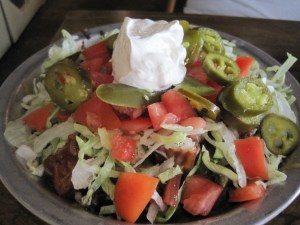 Alicia had heard rumors on campus of tofu BBQ. We Googled and found the place to go…. RP Tracks. I’ve got to admit that I hadn’t been there recently but as Alicia worked, Purvi & I headed over to give it a shot. They had a menu touting the “world famous BBQ tofu” so she knew what she had to try but still there were lots of options! She looked through the list…. BBQ tofu sandwich, BBQ tofu nachos, BBQ tofu burrito, and there was a host of other vegetarian dishes available. She decided on the nachos (I had to tell her that we regularly eat BBQ pork nachos & love them!). I went for a spinach portabella quesadilla (sort of balanced the major hunk of meat I had for lunch thanks to Huey’s with friends). As our waitress brought dinner to the table, we both looked 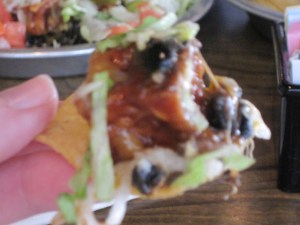 bite of nachos – lots of toppings!

over the BBQ tofu nachos closely. Yep, the black beans were there, lettuce, tomatoes, jalapenos, sour cream and we looked for tofu. It was cubed and covered with barbecue sauce…. maybe grilled. We dug into our dinner and it wasn’t long before I told Purvi I had to try hers. I was pleasantly surprised as it definitely tasted of Memphis barbecue! Nice to know someone in Memphis has taken the time to figure out a way we could share Memphis barbecue with a vegetarian! And the fun of Purvi posting that she had Memphis barbecue as her Facebook status was really something to behold. Have you had vegetarian barbecue? If so, what was it like?

0 shares
« Tree Frog Getting His Dinner Leaves Me Wordless this Wednesday
My Week in Photos (Week Ending July 1, 2011) »