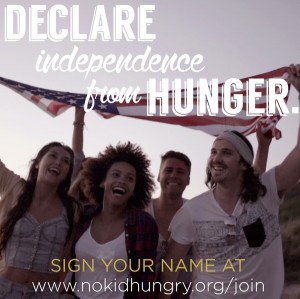 As Americans, we tend to think of the Fourth of July and Independence Day as synonymous. But we also know that gaining one’s independence is a pivotal point for individuals — think about how various people you know have celebrated their independence whether that was from a university program they worked hard to complete or a relationship that didn’t turn out the way they wanted.

But those community celebrations of independence are the most American of celebrations. The folks at Share Our Strength and the No Kid Hungry campaign are beginning to assemble the community who will help us celebrate independence from childhood hunger.

You don’t have to travel far from many of our homes to see hunger. And while some of us may get hardened to the signs of beggers along the road, most of us have a soft spot in our hearts for kids who are hungry. And I am sure the kids in this video will tug at your heart.

But it can be hard to figure out how to take action. If you’d like to get involved, even if that involvement is simply becoming more aware of the issue facing us, you can take a quick step by joining Team No Kid Hungry by signing the Declaration of Independence from hunger. And check out what others are sharing with the #NoKidHungry or #TeamNKH tags on Twitter, Facebook, Instagram, etc.

It is a simple thing to do and you will get occasional emails from the No Kid Hungry Team. Those emails are probably way better than some of the stuff you are currently subscribed to — at least I know I get some real garbage.