Yeah, I feel sure you weren’t expecting that title on this blog or in your feed, but I have shared my love of the World Cup here before. Reality is I do have a passion for the World Cup. I can remember watching various World Cups for years…. Finally four years ago, I decided I simply must go to a World Cup. I gave a lot of thought to going to Brazil, especially since I have good friends from there, but the country didn’t seem too intent on getting security down early & nobody I knew was joining my enthusiasm so I wimped out.

Why do I enjoy soccer?

I was intrigued by soccer early in life … kind of think it had to do with my interest in international travel, etc. Even in elementary or junior high school (way back then soccer wasn’t a sport played on playgrounds or weekends). I chose to do a report on soccer great Pele. In high school I would see pick up games and watch with interest as the sport seemed to require a lot more athleticism & endurance than some sports.

By college, I was friends with people from around the world. Some of them would happen to be very passionate about soccer. VERY passionate. 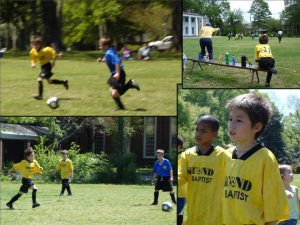 I would end up becoming a fan. Sitting on the sideline or traveling to a game a few hours away and screaming my head off as friends ran up and down the field, some of them played games while observing Ramadan. That is an amazing dedication to a sport!

And like most Americans, I have sat in the stands watching kids I know play.

I’m not sure how else to explain it but for me, soccer has always been part of my community. And having friends in various parts of the world, the World Cup is one of the most unifying events. I think even more so than the Olympics because if you are a fan of the Olympics, it could be for any of dozens of sports, but the World Cup is all soccer. And friends I have all over the world watch…. and while it has always been a connection point for us, with social media, I see it popping up even more the last couple of Cups!

How do you make sense of the World Cup?

Lots of folks in the USA have only watched kids’ soccer and I have to admit that the strategy with kindergartners may not be the best prep for the finesse of the World Cup. Add to that, we think the you can call the US’ baseball league the World Series, and you realize we may not fully understand global sports.

This two-minute video my friend Patrick shared on Facebook last week is helpful.

Choosing a Favorite in the World Cup 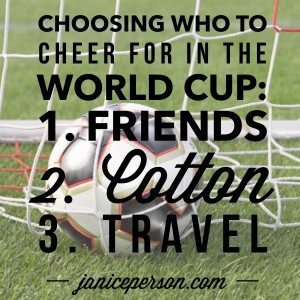 I have to admit that first and foremost, national pride seems to be the deciding factor for most people. But since there are only 32 countries who get to go to the World Cup and only half go forward after the groups. That leaves 180 countries who won’t have their team playing past groups. So if you set national pride aside? How do you pick a favorite in a game?

I have a few factors that I weigh heavily as I look at a game:

Now the other day, I had somewhat of a tie to figure out. I have traveled to both England and Italy and have friends in each country. Neither grows cotton, but both have some industries that are cotton related. Hmmm…. I tweeted about my dilemma and luckily Hank Campbell of Science 2.0 could prompt me to think…. Should Italian wines & pasta swing the vote? Add pizza and Rome if I needed more convincing!

I have to give a major shout out to fellow St Louis blogger Chris Miller aka @Idonotes on Twitter & Instagram. He and a friend are also posting to a blog called vvorldcup.com (with two vs instead of a w). Everyday, he is making me wish I had gone to Brazil! And he is making me think that I should go to the next one in Russia. I’m thinking it may just be meant to be since my first trip outside the US was Russia and I’ve wanted to go back ever since!

And finally, if you still don’t understand what the hype is about, watch this clip by comedian & commentator John Oliver.

0 shares
« When It Rains It Pours…. Literally… Like Monsoons… Torrential Rain
The Independence Day We Should All Want #NoKidHungry »