I sort of feel like maybe I need to confess some things in order to get past them. They’ve been going on for a while now and I’ve been trying to just smile and move on. That’s just not seeming to work somehow and today’s reality checks — TWO OF THEM — put me about at wit’s end!

Some of you may have seen the post I wrote about feeling a bit out of whack due to a temporary automotive setback. I had bumped into a mailbox at a friend’s on Christmas night. It was seemingly cosmetic and I was really busy. I figured out how to get the work done. My sis agreed to help. There was a setback, we regrouped and I ended up driving her big ass SUV. That’s where I left the story the last time. Her smiling big as she tooled around in my little red convertible and me suffering sticker shock at the gas pump.

But we have had many chapters written in the past month! I’m hoping that by putting them all out here, I’ll get rid of the bad mojo! So here goes!

When I last wrote, we thought that one week would be my sis driving my car and then she would drop the car off at the body shop. She’d have a few days where she & my nephew would share cars but it wasn’t too bad since she’d be out of school and wanting to just peace out some. And I would keep loading up things to donate to charity.

Well, the garage, for some reason simply didn’t open. We figured we had misunderstood and instead of one week’s vacation, he had meant he was taking two weeks. So we waited. 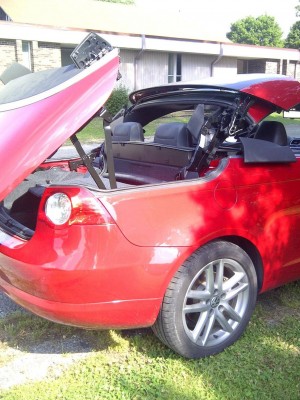 On Memorial Day Weekend, my sis was enjoying the weather and when she got to a cookout, pulled the lever to raise the top…. It stopped somewhere on the way up. Just decided not to go further. Seriously.

We decided with the body shop closed, she could get the dealership to check into the top. After hours they said maybe the little dent somehow was responsible (never mind that I had lowered and raised the top a hundred times or more).  Or maybe it is something else…. they couldn’t tell and could look again on Monday. Uh, leaving her without a car for the weekend when the car wasn’t even being worked on….

My sister and I joked about the car having separation anxiety and she picked it back up. The goal? Get it to the body shop early the next week.

Back to the Body Shop

Eventually, the body shop opened back up and the guys said they would get right on it and they would even see if they could figure out the top. I headed to Memphis on a Friday to pick it up. Leslie didn’t have it yet but it had been there a while so I had packed her SUV (all cleanedup and ready to go!) before I went to work. I decided to head south even though we talked as I prepared to leave town. That’s when it became clear I would work remotely Monday til I could get my car & head north. 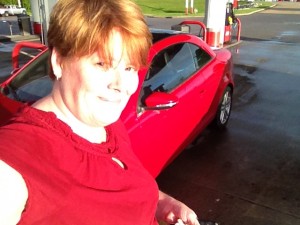 And then really heavy rains came in and painting was delayed…. and I’d work remotely Tuesday too. Sure was glad I had the kind of job where I can work with a laptop and wifi!

I was jazzed! Hit the road immediately and along the way even took a happy days photo as I filled the tank (a VERY cheap fill compared to the monster SUV!)

To celebrate once I got home,  I decided to get the car detailed. The whole shmoly, a handwax and everything. I figured it would help us move forward. I’m not sure I had seen the cup holder that clean since I drove the car off the lot and I Instagrammed the moment of celebration.

A Top Ready to Go & A Couple of Tires

A trip to the dealership and a wire was found as the culprit for the top not working. I got a couple of new tires, an oil change and whatever else… and I figured my car was back to it’s previous state.

The dent was gone, the top was fixed, it was clean as new and more… that is, til today.

Today when I got to work, it was already hot even though it was just 8 am. I decided to leave the sunroof cracked a little bit. Not great as rain appeared out of nowhere! As I walked to my car, I wondered how bad it would be. I can’t remember ever leaving the sunroof open or top down when rain hit. I can remember a sprinkle or two but rain? Not to my recollection.

I got a few napkins and kleenex and was good to go. Picked up a friend to grab a bit of dinner and as we were enjoying pasta, I noticed a few folks at a nearby table staring at the front door…. rain had returned.

Then the rain become monsoon-like! 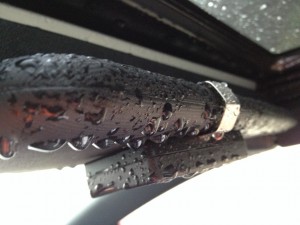 Rain was horizontal! NO JOKE! And of course, I had left the sunroof open a little bit again, trying to let the car dry out. AS IF! Rains came down vertically and suddenly as it got near my car it went horizontal! Seriously.

We couldn’t tell it so much from the restaurant because the rain was so heavy we couldn’t see the car across the street! But as we left, armed with a stack of paper towels and opened the car doors, BAM! It looked like someone had turned a sprinkler on INSIDER THE CAR!

We feverishly wiped down the seats and got out of the rain. When we sat down the laughter started! RAIN WAS EVERYWHERE!  Seriously, when it rains it pours!

I hope the laughter and the sharing the insanity of the saga is enough to break this jinx!  Not sure my car and I can take much more!

Have you ever had seemingly never-ending bad car mojo?