It is amazing how one thing can change and leave you feeling a bit off your game in several other areas. As much as I have been traveling recently, that’s probably to be expected. I had a crazy few weeks on the road recently and have been trying to get my head back in the game here at home. One thing that just hasn’t settled in though is driving. That’s because I don’t have my car this week. I am out of my element. 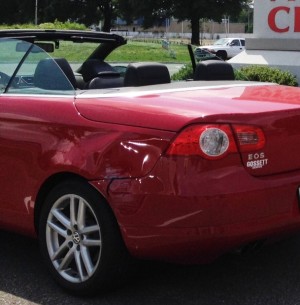 Finding Time for the Body Shop

See, this winter I had a bit of an accident involving a friend’s mailbox. Once I realized I was going off the drive, I tried to correct and BAM! The brick entry to the drive that holds the mailbox took a bit out of the back quarter panel of my beloved convertible. If it helps, my friend says a half dozen or so others had hit the dang thing before me LOL!

For those of you who know me, you know I really enjoy that car. I did my big Labor Day road trip to Montana in it (by the way, that reminds me I need to get back to that trip..,. I never did finish that series of posts!)

I have continued driving it and wondering when I’d find time to get it fixed. It’s a hassle for sure and really, the dent bothered me far more than it bothered anyone else. But finally, a plan was devised.

Yeah, I know. I drive rental cars a lot. But helping my keep costs down, my sister agreed to take my car to the shop in Memphis. (We’re the kind of family that has no worries doing that sort of thing. She drove my car quite a while a few years ago when someone hit her van.) She let me bring her car, or should I say big ass SUV, back to St. Louis.

Taking the SUV (a Toyota Highlander to be exact) meant I could finally get some of the things I had at my mom’s home. I loaded the vehicle up. It was a great feeling. I left Memphis after lunch Monday so traffic wasn’t a worry but no joke, within a few blocks, some goofball was backing up at an intersection and almost hit me! 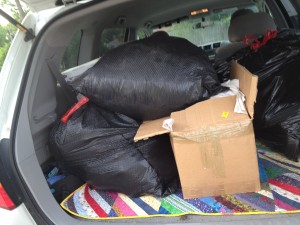 I have to tell you that driving through the construction zones on the highway made me wonder a few times whether the lanes were big enough for me! And I figured I wouldn’t be able to park it near other folks since I felt like I was driving a luxury liner! As I went to work the next day, I worried about where to park so I didn’t have to back out near anyone. Yeah the size was intimidating.

Taking advantage of the cargo capacity was definitely what I had in mind. I loaded up a bunch of things I had purged from closets or cabinets. I went to buy a few things that I’d been wanting to get but worried about how they’d fit in my cute little car. I have to admit, I have gotten a bit more used to it but seriously, I don’t feel at home in it. I find myself thinking through my route in totally different ways than I ever had before. Yeah, I think I’ll be okay returning it to its owner! 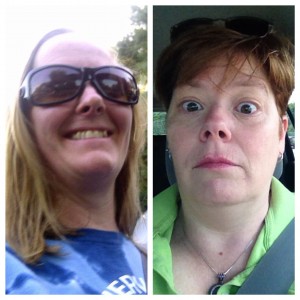 We hadn’t compared notes on driving each other’s cars til Friday when I got a text from my sis as she drove to work. The happiness from having the top down was palpable! The same morning, I was filling up the tank so we exchanged selfies… yeah, the expressions are pretty different!

She was totally relaxed …. had been enjoying the wind in her hair. I paid a bazillion dollars at the gas station and had to navigate traffic. Hmmm….

Leslie is thinking she wants to buy a convertible the next time she gets a car and I’m thinking SUVs are rentals only!

0 shares
« Cavin Farms Looking at Broccolli & Cabbage Seedlings
#YesAllWomen has Been on My Mind, Now it’s on the Blog »