I’ve been reading the articles online and having the discussion with friends and family…. but I hadn’t added my voice other than a few tweets here and there and some comments on Facebook. As I read Estelle Tang’s open letter to all of her male friends, I thought maybe my voice should join the #YesAllWomen body of discussion. 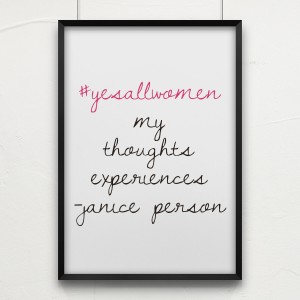 The fact that a man can make so many people (men and women) reach the tipping point…. that one man who feels rejected by women and actually murders them. That’s a kind of insanity that I don’t expect to understand and hope you can’t either. Not being able to understand the driver or some of the thoughts crossing my mind as I read thoughts from others has made me think my thoughts may not be that important to share.

And then I remembered some of the discussions from Mom 2.0 Summit and I thought to myself about the fact that because I have already put myself out here in the blogosphere, and some people care to read what I write, maybe my speaking up could reach someone that hasn’t heard a voice that resonates on the topic for them. One of the basic thoughts behind the social media sharing of #yesallwomen is for us to show that some of the things that happen to women across society, happen to many more of us than people think.

There are so many things that go undisclosed in people’s worlds. A lot of this is considered deeply personal and sharing it with others means you have to deal with it in some way or another. You have to remember things you have tried to forget. You have to think about the fact you faced something threatening and felt powerless or decided because it wasn’t any worse, that you were “lucky.”

A Family of Strong Women

Lots of people have commented to me through the years that it must be great to be from a family of strong women. My mom and grandmom have always been known for great strength of character but incredible compassion too. I’m lucky it continued into my generation with my sisters, cousins, etc and we see it in nieces too! We’ve also got some great men in my family and my brother has been actively raising the conversation around #yesallwomen quite a bit.

My personal strength is probably most known for the independence and sense of adventure I’ve had. I have traveled to far corners of the world independently. I have had more than a few people ask about my moving to New York on my own or what I was thinking when I chose to go to the Soviet Union. Other friends worried about me going into poverty-stricken areas of the Mississippi Delta or going to Malaysia to observe Ramadan. Reality is all of those adventures are things you prepare for, you think about the vulnerabilities and you think about safety.

What happens in the day-to-day? Are we always supposed to be “on ready?”

I am definitely lucky. I was born into a family where while we were pretty far down on the economic ladder as I grew up, my family really encouraged us to do well in school. We were raised with a good work ethic. We were encouraged to believe we could have a better world and I have a real sense of pride in looking around our family and having seen us do okay for ourselves.

We live in decent neighborhoods where you can find people running or riding bikes, where parents tend to be involved, where the police tend to keep law and order at the forefront. And yet, knowing we are in a fairly protected zone, we never know when someone will take something from us, whether it is verbal or physical.

I say some of this because I’ve felt it too. I’ve experienced having someone make me feel dirty or less than, whether it was something that on its own may not seem like a big deal to another person (which I’m sure some will think of some examples in Estelle’s open letter) or someone was saying things in a way to totally tear you down in front of others (something that happens seemingly constantly now) or something that only happens when nobody is likely to pass by.

Yes all women have had to deal with bullshit from some guy or guys who shouldn’t be doing what they are doing. And no, all men do not do these things, nor do all men turn a blind eye. This isn’t about women vs men, this is really about civil society calling out the bad actors. It is about civil society helping our girls and boys learning what is expected and what kinds of things are unacceptable. It is about the majority of us standing up for each other — sometimes that may be guys donning red high heel shoes to walk a mile in her shoes. 🙂

Yes all of us can do better and help produce the kind of society we want to live in and the type of society we want for our children, or in my case my nieces and nephews, the children of my friends. Knowing that is reason enough to speak my mind and try to raise awareness in the topic.

0 shares
« Feeling Out of My Element Even Though I Am Home
The World’s First Christian Church in Antakya, Turkey »