Last week was one for the record books when it comes to smartphones. With that in mind, I wrote a guest post about what’s happening at Blackberry for TheMobileFarmer.com. I encourage you to read it, particularly if you haven’t been closely following smartphone news in the past week as Blackberry had major announcements and Nielson released a major study on the growth of smart phone use. I don’t intend to duplicate the efforts here but thought I’d point out some of the personal pieces. 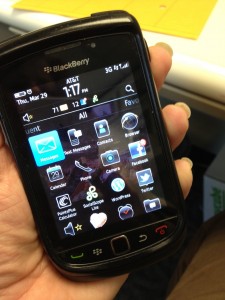 I think for a lot of the loyal Blackberry users, the end has been coming for a while. That’s certainly the case for me and others. For years I was pumped to have a Blackberry. In recent years I was accepting of having it. After all, I have one as part of a corporate plan and the fact it was supplied by the company was fine with me. No need to incur a personal expense if it wasn’t necessary. However in the last year or so, more and more corporate users have been making a move to other technologies because Blackberry stopped innovating. No new programs to run. No hardware advancements that resulted in even close to the new tech leaders Apple & Android. I personally know dozens of people who have decided to purchase one of these phones at their personal expense to simply keep up. (Yes, I too made the move and without pomp & circumstance am willing to admit to becoming a iPhone user.) continue reading An Innovator Rapidly Lost Relevance in the Tech Boom | The Mobile Farmer.

Yes, so there it is, I’ve put it out there. As I told a couple of friends, I’ve extended my membership in the iCult by becoming an iPhone user. And just like that, I’ve become a part of a long-time debate of Android or iPhone. Its not the most critical decision I made in the past week but I didn’t do it lightly either. So, since there has been some interest in how I arrived at such a (intelligent or incorrect) decision, I’ll tell you some of the factors that led to my personal choice:

And although I joked about being part of the iCult or #teamiPhone, it really is still just a tool. A good tool, but nonetheless a tool. It doesn’t define me as a person nor do I judge others by the phone they carry. I have been fine using Blackberry for years and don’t apologize for it. Heck, I really have kicked butt with that thing! I know people who have phones without cameras. They are fine too.

Picking something that works for what you need is more important than the other. And yes, a bunch of folks joke about the alliances formed over smartphone choices, but I’ve never chosen friends based on the things they have, I value the people they are first & foremost. And I respect that they may make different choices that are better for them. I also appreciate great senses of humor and the winks that go with smartitude. That’s not just my philosophy on phones, its my philosophy on lots of things. How about you?

0 shares
« Looking Forward to an April Trip to Iowa for #140conf!
Spring is Totally Rockin’ the New Yard / Home »