I was reminded clearly this week that my ideas of growing old have radically shifted in the past 15-20 years. Its not so much a revelation as I have noticed over time my group of peers has a wide spread of ages for some time, but this week-long vacation with my nephew Kazu was a stake I put in the sand two decades ago. Yes, I speak in decades and yet have friends who are in their twenties.

Like I said in a previous post about this vacation, I decided to do this long ago when my nieces were young. I figured that as much as I was traveling at the time, I’d be able to gather up frequent flyer miles for the trips. I talked to my older sister about traveling with her daughters long before my little sister started her family. In the typical mindset of youth, I didn’t really ponder the unborn.

Then Leslie got pregnant and I sort of wondered to myself, wow…. suddenly I had a trip scheduled for 16 years later. And I soon found out it would be with a nephew.

I have to admit, it was intimidating.

I had always been the “cool aunt” or as my cousin Jon-Eric calls me “Auntie Mame.” Friends even clipped articles out of magazines like the New Yorker that bestowed the virtues of single aunts who lived life to the fullest and shared that with nieces & nephews.

For a long-time though, I was really worried.

Would Kazu want to travel with old Aunt Janice? The worry came from two things the old part and the aunt part.

And I really didn’t want to share this worry with anyone else, so for the greatest part, I internalized it. Maybe that’s normal but who knows?

There were times where I wondered if I would need to change the deal. I really considered the idea that maybe I’d need to let Kazu invite a friend along, book two hotel rooms and cut it down to a long weekend. I figured that would be somewhat fair in costs and all, but knew that it would radically shift how the experience looked. There would be a distance in communication built in by having a third person along and the difference in having separate rooms would be clear.

However, in the last few years, I began to realize that maybe I should stick true to the vision. Keeping it the full week and just the two of us. I was a bit concerned that I may not have the physical stamina needed to keep up with a 16 year old boy and I knew I’d need to watch my diet more closely or I’d gain every bit of that 25 pounds I managed to lose the last six months, but I thought the big picture would still work.

On Thursday, as we were headed to the subway, I turned to Kazu and said “I’ve done pretty well keeping up with you huh?” He looked at me a bit blankly and said yes. That’s when I told him that I had worried I’d be too old for the trip. And he laughed. It was a great laugh that we shared.

Now I’m wondering what sort of adventures I should put on the calendar for 15-20 years out. The way I see it, I’ll still love traveling and people. Besides, knowing how this went, I’m betting I’m still young enough to give some travel mates a good run for their money!

What type of travel should I put on the calendar?

As I sit in the airport waiting for the flight home, I 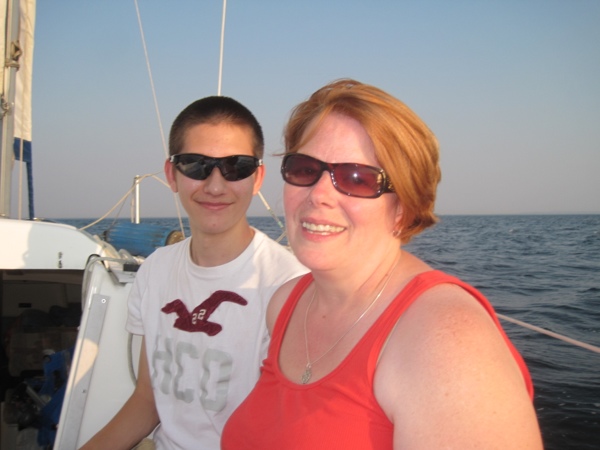