I had a chance to catch up with my friend Kelly’s parents recently. Kelly & I became fast friends in college and made more than a few trips to visit her family while we were in school. This small school Phillips University (Enid, OK) helped me meet people from all over…. and although Kelly’s parents (Dick & Tish) lived just a couple of hours away, visiting family let me talk about lots of places in the world and about approaches to improving the world. Those are the kinds of discussions I just can’t get enough of! 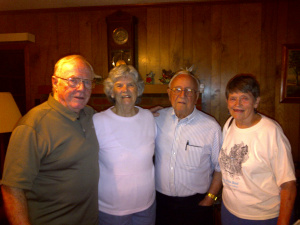 We spent one night talking to other friends of my family who had served in Africa. While people call the job they did missionaries, the work they did sounds just like the Peace Corps. Working with communities to improve their surroundings. If you can teach more people to read in a variety of languages (some I have never even thought of hearing) or how to build  better homes or supply the village with better water… that’s truly making a difference in the world!

All had spent time in the Congo, raising their family alongside the families in these communities. (My friend Kelly was actually born there, fun hearing stories of the celebration they had for that!)

Dick & Tish actually came through because they were going to a gathering of 50 former missionaries in the Congo. They are still looking for ways to make a positive difference in Africa and had me track down the author of a National Geographic article that talked about portable solar charged lights. It was great to find her on Twitter & get to chat. She told us “Solar Aid (http://t.co/Xy44wdm) is one microsolar distributor; find more through http://t.co/1q7J87YThanks for reading!”

Since my friend’s parents have frequently been involved with managing a ranch, agriculture was of course part of our conversations. The variety of things that can help people feed themselves ranges so drastically from fair access to sell the food the farm raises to the ability to overcome devastating pests. As we talked about Bt. protecting corn and cotton crops, he asked about whether we could get that in pecans and started explaining how valuable it would be. And you can’t help but think of how many ways we could use the pecans that are saved!

We had the chance to eat something I pulled together at the house a few times — we all love fresh fruits and vegetables so it’s pretty easy to get smiles all around! But I also made it a point to get them to our favorite barbecue joint (Central BBQ of course) and in the rush of things, one night we choose to have Lou’s deliver a pie. Yep, life was good.

Civil Rights in the U.S.

But the highlight of their visit was a trip the the National Civil Rights Museum downtown. I’ve been to the museum MANY TIMES. It is one of the top places for me to take guests who are interested in seeing Memphis. The exhibits are always moving for me. They make me remember back to my childhood growing up in Memphis and the fact I’m so lucky. I’ve had friends of all backgrounds throughout my life…. knowing their parents & others went through such challenging times… that is something we shouldn’t forget. And the museum has a great series of exhibits where you hear from witnesses — both the hateful ones as well as the objectors to the injustice.

The film “The Witness” started our visit. Even during the film I tweeted about how great it was. The film is the perspective of Rev. Samuel “Billy” Kyles, the only person who was standing alongside Rev. Martin Luther King, Jr. on the balcony of the Lorraine Motel in Memphis when Dr. King was shot.

The movie “the witness” showing at @NCRMuseum is incredible. First-hand story of the murder of Martin Luther King Jr 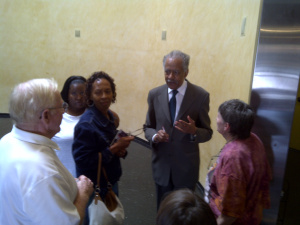 Rev Kyles talks with guests at the museum

After the movie, we wove our way through the timeline of events, seeing Rosa Parks on a bus & sitting down nearby…. and watching the surprise on people’s faces as they are asked to move. We watched people sit down at lunch counters & face beatings. We were reminded of many great Americans — African-American, Caucasian, Jewish, etc — who stood up for what was right. 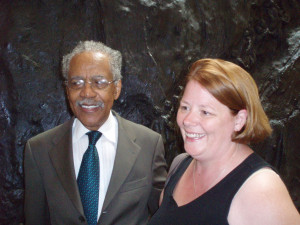 Rev Kyles & I in the National Civil Rights Museum lobby

And then as we neared the gift shop, I was told that Rev. Kyles was at the museum saying hello & trading stories with people! I WAS THRILLED as were Tish & Dick. We had a chance to stop and listen as he talked to a number of people before we got closer. He was especially enjoying talking to youth who were eager to learn and the adults who had shared experiences.

It made for a very powerful afternoon.