The Jordan River goes down from the Sea of Galilee to the Dead Sea. It seems to take all the salts in the earth along with it and has for so long according to our guide. And since the Dead Sea has no tributaries leading out of the body of water, the deposits all end up there and become concentrated. And like all water in Israel and the Middle East, the Dead Sea is drying up slowly.

What an experience to float in the Dead Sea! I swear the buoyancy factor made it like we were laying on top of the water rather than floating in it! Just the feeling of the water… so often when I’m swimming it is in a pool with chlorine, etc. In a pool, my skin feels dry unless I’m putting moisturizer on. But this…. the feeling is really hard to explain, but my skin felt so soft yet it didn’t feel like there was an oil on it or anything. It was soaking into my skin rather than staying on the surface or something. 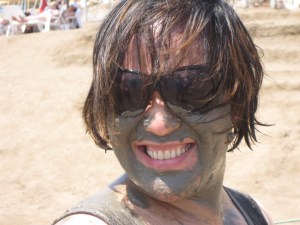 And to put the mud on us…. The feeling your skin gets is so unique. It is really like you have had the best moisturizer possible. We all just pulled handfuls from the sea floor or from along the water’s edge. I wore goggles as we were told to avoid getting the water in your eyes, mouth, etc. When I got out, I headed straight for a beach shower. Before I got to the shower, I licked me lips. It was crazy salty. You do not want to do that.  Somewhere I read that the words really mean “killer sea” but it sounds nicer to say Dead Sea. However we were all warned about people who accidentally drank some & got quite ill.

As we left the Dead Sea, we went to have lunch nearby. As we looked up, you could see the caves where the Dead Sea scrolls were found.

Along the way, we went to Jericho – it is a Palestinian-held territory so our guide had to get out before we went there. He waited at a gas station while Saher took us to show us a sycamore tree, an incredibly rare sight in that part of the world. Surrounding the Dead Sea is a desert, but Jericho is an oasis in the midst of it because there is a water source there. To say it is an oasis may creates images in your mind spawned by movies and that’s not what I saw at all. It is so different from Israel. Really. The town looked differently. More poverty.

You can read a lengthy article on the Dead Sea on Smithsonian.com for a lot more information on the history, composition, current state and politics.

Other posts on my recent vacation to Israel include: