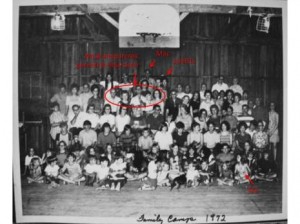 There are those people in our lives that we come across and for whatever reason, there is an immediate and lasting connection. I grew up with an “Uncle Mac” (previously mentioned in my Flat Stanley series).  Our families went to church together, took summer vacations camping together and he bowled in the same league as my dad … for us, he was always Uncle Mac. I always thought he was awesomeness in action. One of the most vivid memories is probably an amalgamation of memories of several different times we sat around the campfire with Mac playing guitar and singing some of the craziest songs I had ever heard…

It was great fun to hear a grown up singing about how “grandpa Jones was a good ol’ man but there’s one thing that he can’t stand, he’d grab that cane and start to pack whe grandma started that yakety yak, he’d say ‘I’ll be walking, while you’re talking,’ said ‘I’ll be walk, walk, walkin along.” We’d laugh and smile like crazy. He’d also sing a song that would raise eyebrows as it talked about just how bad someone needed a cigarette and how smoking them would puff yourself to death. And I can remember coming up with berries so we could add them in when he would sing about “wine spodee odee” and we’d all join in. Or any of the other songs he’d come up with cause we loved them all.

It wasn’t until I was in high school or college that I found out that my Uncle Mac (aka Malcolm Yelvington) had recorded those “made up” songs (they were rockabilly) for Sun Records. I’ve always loved music, but in college with a professor who was part of music history — Bill Randle — I got into it. And I remember spending time with Uncle Mac and his wife Louella figuring out things, getting him to play some for me and walking down the two memory lanes — his in the music business before raising a family and mine of being a kid entranced by a friend of the family who sang with a big smile.

Discovering his connection to Sun sure made my visits home take a different spin. On several occasions, I found a way to get time with Uncle Mac and his guitar! He loved it as much as I did (and maybe more!) I had the chance to visit he & LouElla at their home and got to see him play music in a variety of venues. I got see him play live at street parties in front of Sun, at bars on Beale Street (though Mac & LouElla never had anything stronger than a Coca-Cola, in festivals downtown and probably other places too! And I had more chances to just chat with him about things. After putting music on hold til he retired in his 60s, Malcolm heard from a promoter in Europe. That’s around the same time I got interested in popular music history. But let me tell you about Mac’s piece of history….

Mac grew up a country boy near the small town of Covington outside of Memphis (for those of you who read the blog regularly you’ll enjoy knowing that the Ripley Cotton Pickers was another band in the area). He’d tell me about how that made him a lot more hillbilly than the rockers he recorded alongside. The other names are the names that are spoken in households and on radio stations — Elvis Presley, Jerry Lee Lewis, Roy Orbison and one of the countrier folks that recorded at Sun, Johnny Cash. Lots of people (probably including me) wondered what it was like to be recording music and see that your track was just after some young kid named Elvis and then see Presley and others become famous while Mac focused on his job as a pipefitter. But Mac just sort of shrugged it off talking about those guys were younger and didn’t have families so they had different choices. He found church in that timeframe and joined the church my family grew up in. He had a big family with five kids and lots of grandkids, and great grandkids.

I was lucky enough to be there to hear the stories and see the scenes. One of my all-time favorites (and I wish I had photos to prove the story!) was a time Mac played on Beale during Elvis Week. We went in the club and sat down. There was a Turkish Elvis impersonator (no, I’m not making that up) who was singing a couple of songs. He finished and began pacing around — staring at Mac. Mac got up and played (probably with Gary Hardy and James Lott who were part of a lot of the Memphis gigs Mac played). The guy circled us for quite a while getting closer and closer. He was star-struck. I had seen him taking photos earlier so I asked if he wanted a photo with Mac. WOW! Was he excited! And Mac was grinnin’ from ear to ear. When he sat back down, he told me how many times that same thing had happened in Holland and the UK. How college-age kids knew more about his music than he did. 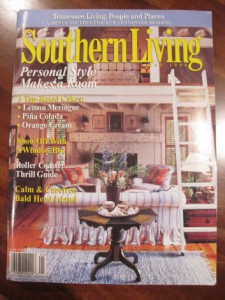 There were several more times he was in the limelight. One that I pulled out today is a 1999 issue of Southern Living that featured a one page article on him. (All this came to mind after my cousin checked to made sure I had Mac’s CD “There’s a Little Life Left in This Old Boy Yet” on my iPod — by the way, why isn’t it among the options for Malcolm Yelvington on iTunes?) And I have another magazine that came from Europe that had an article or two on Uncle Mac. He brought me a couple from one of his tours. That’s safely tucked away but since I moved recently, I can’t be sure where the new safe place is LOL! 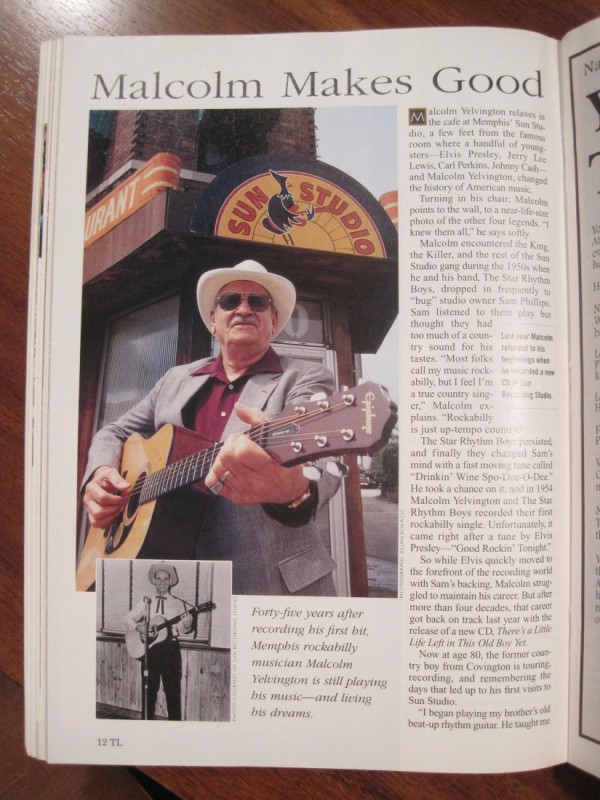 Another story that totally makes me smile…. Malcolm would love this story too. He loved music and his church both and found various ways to combine them, including playing with a group of musicians and recording songs there too. While I’m getting off track, I have to mention that I had the chance to go down to Sun & snap photos of Mac while they were recording. 😛 But knowing how Mac loved the rockabilly sound & the rise of his music late in life and his church, I think he had to be smiling when The Dempseys showed up in their 1950s clothes and great fifty-fied hair! The Dempseys were a rockabilly band that played Memphis a lot and entertained Mac greatly when they played together, especially when the bass player would stand on his bass and play! Just watch!!! Mac had to be smiling at that!

If you didn’t know Mac, I hope you had someone like him in your life. Someone who loved his life and enthusiastically tried new things in his seventies when others were thinking they’d slow down, Mac took his first flight AND IT WAS TO DO CONCERTS IN EUROPE!

If you love Malcolm Yelvington as much as my family (or if you are family), you should check out this video that was done for a film student’s school project. Its kind of fun to hear Mac & see clips from back in the day. It is 10 minutes long though so sit down and relax. And if you’d like to share a story about Mac, feel free!