Halloween is definitely a holiday that has a permanent home in the memories of American kids. I’m not sure how many of us remember a specific costume or a specific party, but the holiday itself…. that was something that caught our imaginations for weeks if not months in advance. Everyone discussed costume ideas or whether this would be the year to buy a costume.

I think a lot of that remains today. Just this week a friend told me her daughter changed what she wanted to be three times. It is a lot for a pre-schooler to settle on the perfect costume for the big day. But I can help but remember how different some of the experiences were too. This photo will tell you what I mean…. it is of my older siblings and I in the 1970s. 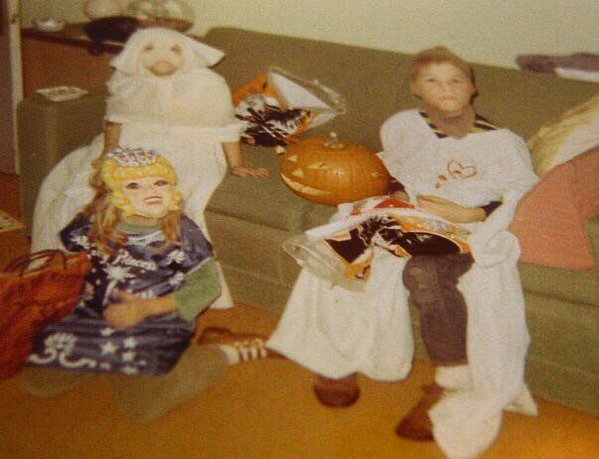 What I Remember Most About Halloween

The 1970s Halloween was a chance to live life to the fullest as kids. For us, we would go out early and walk forever. One of our parents would usually go with us while the other may hang out at home to pass out candy to every one who came. We would run from house to house with such excitement, talking about what our favorite treats were so far and who we thought had given us the best candy.

Parents (ours and those of other kids running around) would stay on the sidewalks, chatting about whatever it was grownups would talk about. We’d almost forget they were there til someone forgot to say thank you or one or us got too far ahead or behind the others. 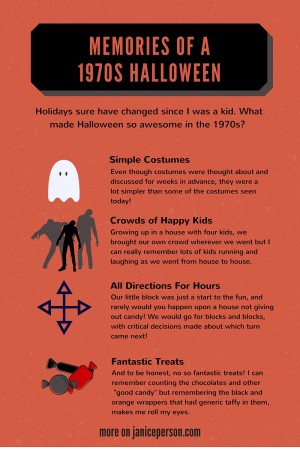 The streets were crawling with kids just like us and laughter was heard everywhere. Now and then, someone would have a few decorations in their yard or on their porch, maybe put a black light in the porchlight…. We’d scream with delight!

We’d talk about the people who offered us full-sized candy bars and how they must be rich or just really like being nice to kids. And we’d stand in awe when someone had small bags containing treats ready for each and every one of us.

I can remember using some of the bags made for trick or treating but also remember our haul getting so heavy those would rip and we used pillowcases instead.

Occasionally we’d get on our bikes or in the car to go to a family friend who lived a little bit further away. Those friends nearby and further away would sometimes do special treats like popcorn balls…. man I wish I had some of those popcorn balls…..

When we got home, we would go to our corners, spill out the candy and squeal with excitement about the pieces we were most excited about maybe count the total number of pieces, maybe counting just the chocolate bars. It wouldn’t take long til we’d start negotiating trades for the candies we were less thrilled about.

The next few days would include candy in our lunches, treats in the afternoon and dread of the day when the only pieces left were the generic taffys in black and orange wrappers. At least for me.

Drawbacks to 1970s Trick or Treating

I am betting that just looking at the photo you have a few things in mind that just don’t look at all on scale with today’s Halloween! Well, here are some of the things that stand out as negatives to a 1970s Halloween celebration to my recollection (much of it photo aided LOL)

We had one helluva time despite all of that! 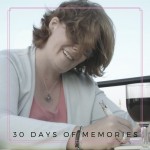 What are some of your Halloween memories?

This is the first of the month-long series of me sharing various memories…. some happy, some insightful, some from home or far away. All of the posts will link back to each other through the month of memories tag! Hope you enjoy them!