I know lots of people are still thinking through the recent election and the outcomes. What could have been differently? What was it that caused ________ to pass or fail? Should we revisit the need for the electoral college? And on and on. I don’t have too much mindshare for those right now but I have two people’s faces ingrained in my memory and I think their stories should be heard and we should be able to do better.

My Experience Voting in 2012 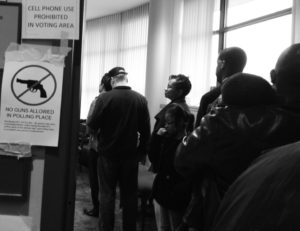 Let me start by explaining my election day experience this year.

It was a new state and a new polling place. I had gotten my card confirming my registration was received and notifying me of my polling location. It was a building I had never been to on a street I never had driven on. And yet, I didn’t check it out til Tuesday morning.

There were stories about long waits on Twitter & TV before I left my house so I decided to Google my location and do a drive by. If there was a long line, I would go on to work and vote later. If it looked like there wasn’t much of a line, I would vote in the morning.

I went to work pretty early that day.

It started raining around lunch time so after a lunch meeting, I drove back to my location. The line was pretty short so I decided to visit the polls. That’s when I met a stranger who’s story I still remember.

As I waited, I noticed families that had brought their young kids and were explaining the steps in the voting process as well as senior citizens. The poll worker who had the “I Voted” stickers came by handing out stickers before I had voted and we joked about not putting it on til I had cast my ballot.

A woman came up and asked if he could help her confirm this was her polling location. He pulled out a PDA or something and tried to look her up. That’s when she explained she had lived outside of the country a few years and hadn’t voted in Missouri for a while but this was the area in which she had long been registered.

Since she couldn’t be found, they would have to call the election bureau. Not sure whether she got to vote officially or not.

A few days ago, well over a week after the election, I met someone who told me they had never voted despite having registered in 1998. He had always lived in St. Louis County and decided this year would be the year to vote. He went across the street from his house to the local polling place — a neighborhood school.

After waiting through the line, they said they didn’t have him on the list that he may be registered at another nearby school so he went to the second place. He waited through the line again. Handed over his ID. Waited for another person. The pollworker needed to talk to a manager. It seemed the manager was moving on slow motion and things kept coming up and delaying.

He spent an hour and a half trying to vote before getting ticked off and leaving. He said he’d never bother trying again.

What do you think?

Thinking about these two people and my experience, several different things go through my mind. How can we make voting as easy as possible while maintaining the integrity of the system?  How can we also encourage people to think ahead and take action before getting to the polls?

To see other posts in the series of 30 days of daily blogging, just click on this image wherever you happen to come across it. There will be a little of this and a little of that in the series, just like there is in my blog at any time! You can also see a list of several other bloggers doing the 30 day challenge on this post by Holly Spangler.