This summer as many of us were thinking about the change that Jon Stewart’s leaving “The Daily Show” would have on infotainment, I had a chance to get a lot of insight into one of the regular guests on his show — the Pakistani girl named Malala Yousafzai who has become a global champion for girl’s education.

It is a bit embarrassing to admit that a show that is known best for its comedy is responsible for me learning about this young activist and I have to say I’ve read about her in lots of places, especially when Malala accepted the Nobel Prize. But Stewart helped me see her for the young woman she is…. witty, dedicated, and so much more. 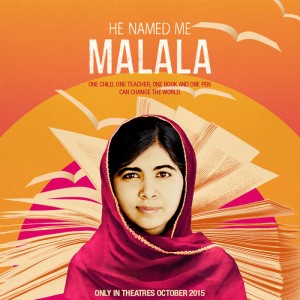 With that background, I was thrilled to find out that an early version of the movie “He Named Me Malala” was to be shown in a private screening during BlogHer this summer. (I was there for work and haven’t written about the conference this year but I did in the past and my friend Brian did a BlogHer 2015 post.)

I signed up the minute I read the announcement and although my time was limited in NYC, I gladly set aside time to see the film. And while I had a free pass to watch the film, and I had to agree not to discuss it until after the embargo expired September 6th, nobody has tried to get me to write a press release version of the film. They gave me a chance to see it early for free and simply asked that I share my thoughts later if I was so inclined. I tried to take notes as I watched in the dark…

At this early date, there were still some placeholders for credits, the call to action, etc. so I plan to return to see the completed film, but I can say safely that the film was very moving and provided a lot of insight into some of the challenges women and girls face in much of the world.

As I watched the movie, I was not only impressed with Malala and her family, but I thought about how many people in how many parts of the world endure so many more obstacles than we do here in the U.S. to get access to things that many people here take for granted. The film centers on education but I think there are applications for so much more.

The documentary combines footage of the Yousafzai family through the years with some really creative animation. While the film provides lots of moments where you are in awe of the wisdom and conviction of such a young woman, standing up for the right to an education…. facing the reality of being shot over her convictions…. you also see the family moments and remember she is a teenager.

I think it is the balance of these moments that makes this documentary by Davis Guggenheim so powerful. It is also why I suggest you start thinking about catching the movie when it gets to theaters in October.

Below are some of the things that stood out as I watched the film and drove me to put pen to paper — a combination of quotes & moments in time. I missed so much and the footage is so compelling, I highly recommend your going and I think I will be seeing it again myself to let more of it sink in.

There is just so much potential in the world if some of us would simply get out of the way…. maybe we could realize more of it!