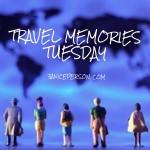 It is hard to believe it has been almost a decade since I was in Malaysia for vacation. That trip was one of so many rich experiences for me! Like some of my other trips, I traveled to Malaysia solo and yet had incredible company throughout my visit! Incredible company was certainly what I had when I was on the island of Langkawi on the northwesgt end of the Malay archipelago.

Langkawi is a beautiful island that we reached by taking a ferry over from Kedah and although I have lots of stories to share from that trip and even that leg of the trip, today I wanted to share just one glimpse of Langkawi. An evening of seeking to understand a unique culture and history as I went to a Chinese temple to see a small festival.

All of this is as I remember it but if anyone else can offer better information, I am open to changing my story!

We went by the temple in the afternoon, unaware of a festival and saw a variety of preparations were underway. There were fires being lit and tended, with the flames and smoke working to support the events that would take place later. After we got a look at this and the friend who was traveling with me asked some questions and got some information, it was decided we should come back after dark so I could get a first-hand view of Chinese mysticism. 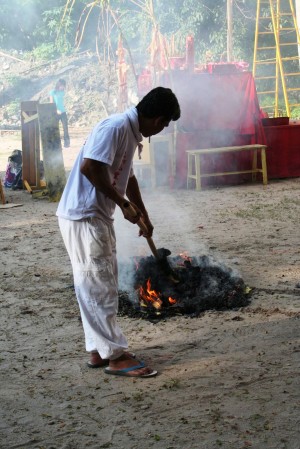 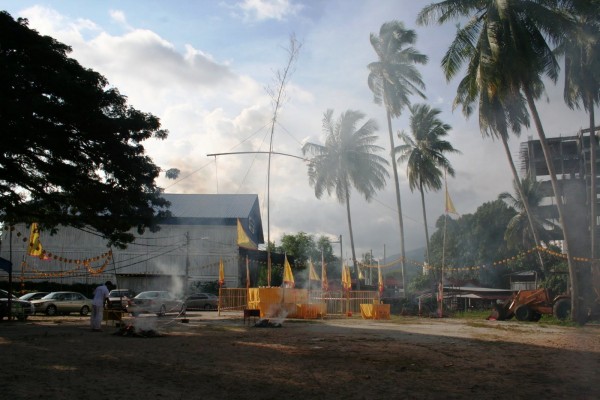 The people coming to the temple in the evening included people who were dressed in white that would help keep the festivities moving. They did everything from accompanying the mystics and people dressed as gods to getting the tools or props needed for each of the rituals. 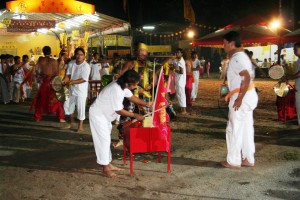 People dressed as various spirits and or gods did a variety of dances, singing and other activities that would contribute to the spirituality of the event. Although this photo below may not fully grab your imagination, the person you see up high, sort of dancing, has climbed to the top of a small ladder & platform. He was one of many who did this in costume, after they reached the top, they would jump onto coals! They would continue to dance I couldn’t help but be amazed by how little they seemed to notice the coals!

Among the primary roles was a spiritual leader, perhaps a shaman or priest. He led a number of rituals and was involved throughout the evening. After several of them, he took a seat and began performing some blessings. He shared rice wine with various people, also taking time to visit finding the perfect thing to offer, to paint it as he provided his blessing and then hand it to them. For me, he handed me a tiny palm leaf he painted in red and said I should keep it with me for one calendar year and it would provide prosperity for me. I did as I was told, keeping it in my wallet for more than a year! My friend got a similar blessing and lucky token too! 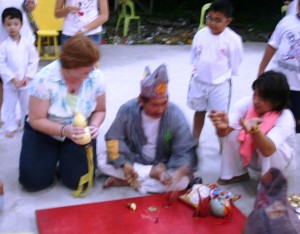 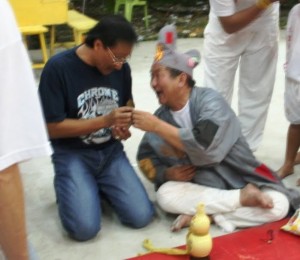