As I mentioned in a post earlier this week, I recently went on the great American roadtrip! Day 1 was Friday. I got up reasonably early and got the car packed before I went to work for a half day.

Packing for the Roadtrip

Packing for a roadtrip is tough. Because you are in a car, the tendency is to overpack, HOWEVER, I wanted to be sure I could have the top down on the convertible when weather made that good. So I wanted to travel real light. Priorities were:

Everything started out in the trunk except things I expected to want to use in the drive that day — chargers for the phone & GPS, my purse, the cooler with some water & sodas as well as some fresh fruit.

To get down the road as soon as possible, I worked hard all week to make it possible to take a half-day Friday. I wasn’t sure I’d pull it off, but it wasn’t long after noon that I found myself tying up the last of the loose ends. The benefit of leaving mid-day was I got in a lot of driving before a late dinner with college friends. The drawback was it was a hot afternoon!

When I moved to St. Louis, I had the thought I’d do several roadtrips, getting to know the Midwest better. I haven’t done nearly as many as I would like, however, I have driven to Kansas City & St. Joseph on quite a few occasions so the first few hours were pretty routine.

I had anticipated hitting some traffic in Kansas City but I didn’t expect the hellacious traffic I got into! There were cars broken down all along the road which made it worse. And at one point, I saw a driver walking back to her car that had been pushed off the road. I was going so slow that taking a photo was a breeze…. in fact, the GPS asked me if I wanted to shift into pedestrian mode!

The Route for Day 1 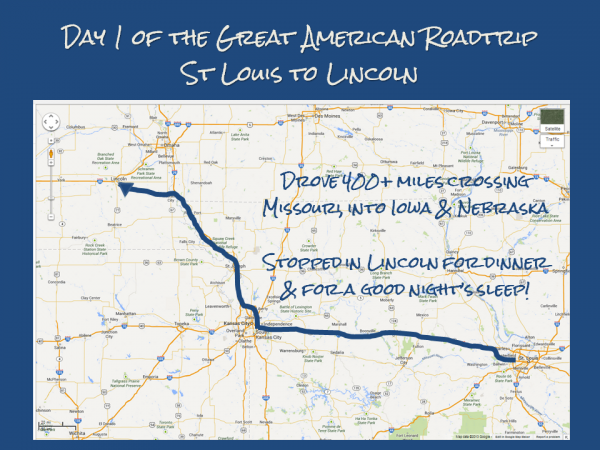 Having driven across Missouri, the a few times, that part of the drive was standard until I got north of St. Joseph, Missouri. Going north through the northwest part of the state and into Iowa, I realized I hadn’t driven in that area of the country before. The scenery was a familiar Midwestern kind, with corn, soybeans, cattle and other crops & livestock dotting the side of the road.

As the temperature dropped, I finally had the chance to put the top down on the car. That made it a real roadtrip!

As I headed into Nebraska, the sun was setting and I decided I better fill the tank up. I stumbled onto a really weird gas station with a massive nutcracker out front! I took photos but not until later did I realize I didn’t get the location down. 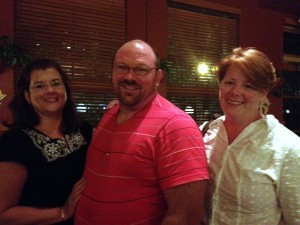 My goal for the day had been to put in a long day behind the wheel and while I did it, there was a great pay off at the end as I arrived in Lincoln in time for the dinner I had planned with dear college friends Dave & Rachel. Dave was among the first classmates I met when I got to college mumble years ago. He and I were in the same orientation group.

Yeah, that’s been a while but like other college friends, it is as if time never passed when we sit down for a bit. We chatted about how various family members were doing, the friends we have caught up with recently, jobs and the various things we have been celebrating. And then it was time to get to sleep. Day 2 was going to be another long day’s drive.

Video & Photos from Day 1 of the Drive