There are a few things pointing me to write about a trip I took two years ago. 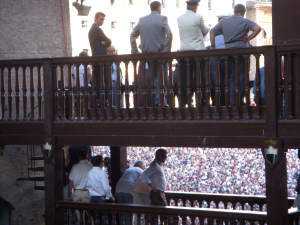 So what story do I think I need to tell? Friends and I had a chance to go to the twice annual horserace in the Tuscan city of Siena. It is pretty amazing to have been in Siena on the day of the race and I certainly love to reminisce but first, let me give you the basics from Wikipedia:

A magnificent pageant, the Corteo Storico, precedes the race, which attracts visitors and spectators from around the world. 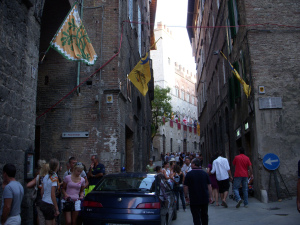 Siena streets ready for the race

Having read that, do you have a picture in your mind? If not, put yourself in my place. You’ve read the travel books & are so pumped to be here. Think about the fact we have driven through the rolling hills of Tuscany to this great medieval city with friends, looking at the city’s walls with virtually equal amazement to the fact there is nowhere to park! You are tourists who have never been to Siena, finding the parking place was one thing but then we had to find a city gate we could enter through. We are nearly running to make sure we are there before the race is run, yet we’re checking the map to see if we can tell where to go!

We run down the stone streets, with flags of each of the riders flapping in the breeze. And we see people everywhere mulling about. we finally find one of the few openings into the town’s historic center and we are told we are too late. The capacity has been reached and the parade will be starting soon. We are HEART-BROKEN to say the least!

We try to find a sympathetic ear explaining that we are from both Turkey & the US but the carabinieri (police officers) had seemingly heard it all and we got little more view than the photo above. Instead, we ended up wandering around the streets of this beautiful city. And we walked through the quiet (kicking ourselves quite a bit for not getting to Siena early in the day) until we found ourselves in another piazza, this one on top of the hill and in front of the duomo (church) where a small crowd was beginning to gather. 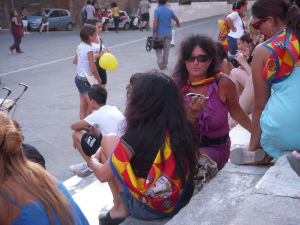 the steps of the duomo attract fans with radios

Even though we weren’t in the roar of the event, we had incredible seats. The Duomo is beautiful and the steps to it provided seats for lots of folks who didn’t get in. We slowly made slow talk with a few people, learning more about the area as many were locals. I found a scarf for me that aligned me with a specific rider & got souvenir flags for nephews. Once the race started, people-watching became INCREDIBLE! The tension…. well, some of the people where we were absolutely were enthralled with the event. They paced, squeeled, hissed, etc. And taking cues from them, we finally rose to our feet as the race neared the end.

Once the race ended… that’s when our new “friends” from the steps, coached us to establish good position so we could be inside the Duomo. I feel certain I shot video of this, the images are so clear and rushing past my eyes, but all the video from Italy has been searched and none of Siena has been found. Suffice it to say, missing the parade and the actual race are still on the to-do list, but we were in a very small crowd who were able to celebrate with the teams. We saw the priest provide words of thanks. And we saw the residents of the winning contrade (neighborhood within Siena) totally come to life celebrating the accomplishment as others began to plan for the next time the race would be run. That’s what’s happened for hundreds of years and the residents of Siena expect it to continue for hundreds of years more.

If you find yourself in Tuscany in July or August, I highly recommend timing your visit to coincide with the Palio di Siena. I just don’t know if you should jockey for a seat in the stands with 50,000 others or on the steps of the duomo with a few locals. Either way, I can guarantee you will have an absolute rush!

What do you think? Do you need to be in the parade zone itself to really enjoy a major event or are there benefits of being on the fringe?