As a long-time, frequent flier, I can admit I have a very different view of travel than I did as a college student heading to spring break in California for my first big trip without the family. On that trip, I was so excited to be on the plane, I am a long way past it.

And yet, when I think of unbearable travel days one of the worst involved having to sit in a middle seat next to a woman who was wearing strong perfume. I turned the air vent straight into my face and had windburn by the time we took off. After we were at a cruising altitude, I got up and went to the back of the plane to the bathroom, but I really just wanted to stand in an area where I could freely breathe. The galley in the back would be my refuge. After a while a flight attendant said I should return to my seat so I explained. She told me to take a seat in the back and I felt like I had been saved.

Recently, being relegated to a center seat on the long flight back from Arizona brought back memories of that terrible day… It struck me as a reason to share a photo on social media.

Seems some of you…. clears throat…. @miltonstokes…. think I travel in princess class so here’s me in a middle seat on a 3+ hour flight on Friday afternoon. My least favorite airline. #isurvived #gladtobehome #travelersnotebook

So when I saw my friend Don pose the question “What’s worse than flying in the middle seat?” and saw that the comments had been flying, I had to check it out. Seems quite a few things rise to the level of being worse than the middle seat for some folks:

Takin’ it up a Notch 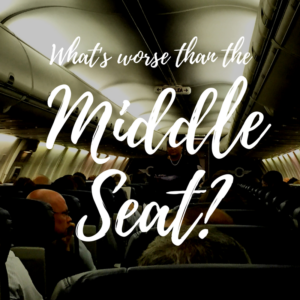 As the thread went on, creativity became a bigger piece of things as we got variations or builds on the standard. Here are a few that especially made me smile.

People who Seem Scarred for Life

The comments that really grabbed me though were the ones that had a lot of details…. like the person couldn’t quite get over an experience they had or maybe they just have a really creative mind! Either way, these answers were funny and jarring! And made a question like this totally welcome!

What besides the middle seat on a plane gets you started?

0 shares
« We Heard Her Scream “Help!”
First Time Snorkeling and I Had A Lot to Learn »