It is so easy to get transported to a different world for me when I’m on a beach. I love the feel of the sun on my skin (what I can feel through the heavy coat of sunscreen). My toes are happy in sandals or sand. And watching the waves roll in lures me into the water time and time again. Add my sister Cheryl as the company I have and it is paradise that will definitely be enjoyed.

Looking at this photo from a day on the beach I am immediately reminded by it. 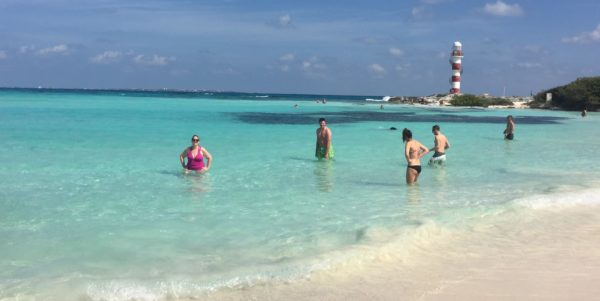 Recently, I had the chance to take all of that in. With the swimsuit on, the stress melted away as we debated whether to spend the next couple of hours on the beach or at the pool. We settled on chairs on the beach and shifted to other important things like the possibility of tacos or burgers for lunch. All the while, setting our towels up on our chairs, slipping our sandals off and stepping into the surf. 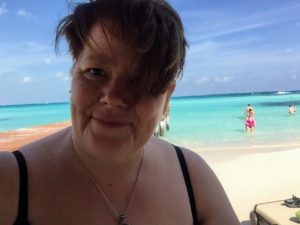 The only drawback? I had left my new action camera in the room. Rather than sweat it, I decided to seize the moment. Maybe the next day we could get photos in the ocean, the iPhone could stay on the beach.

As we walked out in the water, we visited with others who were taking in the sun. Mentioned it was our first day there, others had already been in Cancun a few days. The raves were consistent.

We talked about what else people had done and the cold weather we had escaped. The couple from Minnesota had the trump card. We all relished in our suroundings a bit more.

As we looked out further it looked like the point would allow us to go out pretty far and the Minnesotans said they had done just that. They said the water turns a bit darker where it is deep for a while, but the ocean floor is once again up high enough where you can stand. My sister and I gave each other the knowing smile and we set out to go the distance.

We revelled in the moment — laughing when we felt a bit of a shell, commenting on temporary differences in the water temperature, wondering whether we could walk up the lighthouse and generally catching up on life in two states far apart.

We swam, we bounced, we walked. It was glorious and only the first day of our trip. 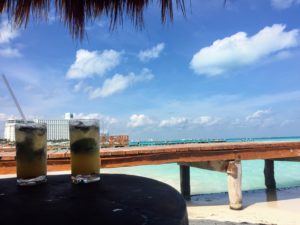 The mango mojios we had were waiting for us on the beach, and both of us were hungry so we decided to make our way back to the lounge chairs near the pier where we had dumped all of our stuff so quickly.

We left the sand bar and got back to an area where we would need to swim for a while. Cheryl must have been thirstier because she got ahead of me. That’s when we heard a cry for help. At least we both seemed to think we did.

As we treaded water, we scanned the area around us. We couldn’t be sure what we heard and then it came again. “HELP!” I saw the lady calling out and we shouted for the lifeguard and then I started swimming toward her.

Cheryl was trying to flag the lifeguards and I told the woman I was coming. Time seemed to stand still.

I remember every movement of my arms and legs as well as the shouts of my sister. I could hear her asking if I could touch as I reached the lady. I couldn’t.

The lady reached out and grabbed on. Again, my sister asked if I could touch. I could see the lifeguard coming. I treaded water trying to decide what to do. The lady was talking to me saying thank you, so out of breath, and I was just happy to get there.

Then I wasn’t sure what to do. Do I wait for the lifeguard? Should I try to swim us both in? It was the first time I paused to think.

The shoreline seemed further than it did earlier and my sister looked worried. The lifeguard was swimming so I decided to try to do the same. I was tired and swimming for two. The lady held on and told me she had been swimming too long. The water was deeper and she couldn’t seem to get back to the beach where her friends were. I said she’d be fine and swam. We met up with the lifeguard who had the ring for her to hold onto. I felt so much relief!

Cheryl was standing in the surf waiting. She told me she had worried about what if the woman was so panicked that she accidentally would push me under. I hadn’t even thought about that! We agreed the lady was in distress but had not reached the stage of drowning where she was sinking.

My heart felt like it was beating outside of my chest. The adrenaline rush was still there. I decided I should sit down a bit. Just a few minutes later we were showering the salt off and debating what to eat for lunch. And it was surreal to have people say they had watched what was happening.

The ocean and beach were still beautiful, but I have to say, the view seemed different. And I can only imgine what Cheryl & I may have captured with the action cam!

How Best to Help Someone in the Water

After Cheryl told me what she was worried about, I remembered all those water safety lessons. In my scenario, I was afraid nobody else was close enough to help and the lady was out of options. I swam for her as I last resort. I wanted to remind myself and others on what you could do so I looked at a variety of online resources including the American Red Cross, WikiHow and Reddit. They all had tips but the convo on Reddit Life Pro Tips seemed most accessible. 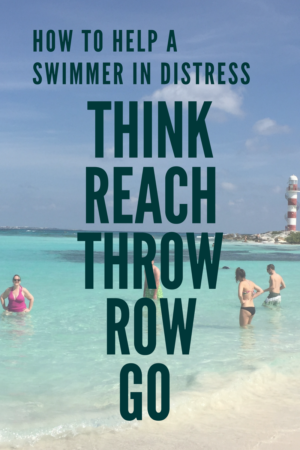 A guy said he learned this from Boy Scouts.

My sister’s worry is exactly why going in the last resort and you only want to do it with support. Cheryl watched me closely and I am sure she would have gotten into the midst of it if things went bad. One of the commenters said “If you ever decide to swim to the person and they start to drown you, swim straight down. The last thing they’ll do is go after you. Then you can kinda swim off to the side while underwater and reassess. Kinda like a riptide.”

0 shares
« Why I Marched for Women in St. Louis
The Torture of a Middle Seat and So Much More »