They expected the crowd to be 2-3k, but more than 10k people showed up to march in St. Louis.

I have a really diverse group of family and friends. They cover almost every part of the religious, political, and economic spectrums. I have friends and family who are immigrants, gay or lesbian…. I have friends and family who marched in St. Louis today — in Washington D.C., New York, Raleigh NC, Oklahoma City, and lots of other places including Switzerland! I know people who are busy with a million other things, people who don’t understand why thousands of people are marching in cities across the country, people who disagree with the marches and people who seem to think they know (some of whom have really misrepresented anything I’m aligned with). 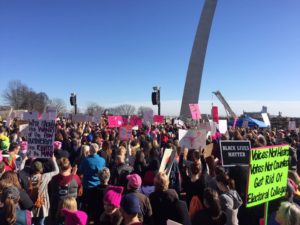 So I decided to take the time to write why I marched today. I hadn’t really assumed I would do it…. If I had, I would have done it in advance so it could rock my social media all day. But I have some friends who have told me they don’t understand and yet they would like to. I know some of my friends want to argue politics, please know, that’s not what I’m doing. I just would like people who are willing to hear me out to have the chance to know why I marched.

Let me be sure you understand…. this is why I marched. I don’t think I speak for all the people marching, hell I don’t even speak for family and friends unless they decide they agree after seeing this. 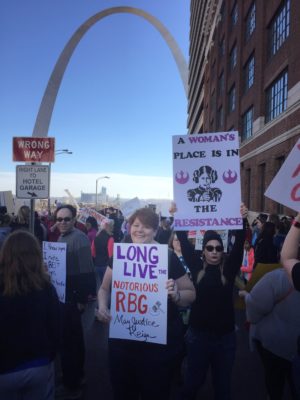 I marched because I think that democracy gives us the ability to shift direction. The November elections were a shift that people voted in. I’ve been in a position where my candidates have lost before and I no doubt will again, but this election was the first that left me afraid for the future that my nieces, nephews and other family and friends will be facing.

I marched because I wanted to show my personal commitment to being more involved in politics. I will work harder to find good candidates for office earlier than I have been. I will know more about the candidates running and the positions they have on the topics that matter to me.

I marched because over the past few years, I have seen the realities of inequity in my community grow. It isn’t the result of one politician or even one party. It seems to be the result of various individuals, organizations and systems. It seems to be that some are still rooted in mindsets that I was too optimistic were diminishing in our culture but have been getting more traction. 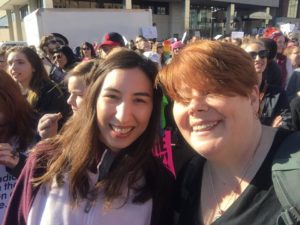 I marched because my family and friends are a rainbow of people, some of whom were born in the US and some who were not. All of them are working hard to make their families, communities and our country a better place. I wanted them to know they are not alone in wanting to protect the rights of immigrants and people of color.

I marched because I realize I have a really good life. I have studied hard, worked hard and focused. Through all of that I have been able to reach success and I have extras like fun travel and a convertible to show it. I realize that it isn’t that easy for everyone. I have bought books for people who couldn’t really afford school but desperately wanted to improve their spot on the planet.

I marched because the collective conversation on topics of science frequently talk about beliefs and opinions more than facts and I feel like science-based decisions should be fact-based. And facts matter, they don’t have alternatives. While I love the pop science that people like Neil DeGrasse Tyson bring, I don’t think that the decisions we make about how we protect the Earth for future generations or how we feed ourselves should be ballot driven. 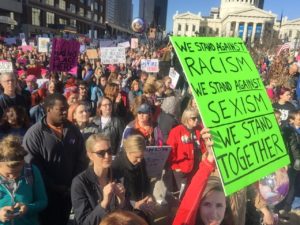 I marched because health care is complicated and while I’m not sure what a perfect system looks like, I worry about people in my life who have trouble getting health insurance and I get mad because medication costs have skyrocketed way beyond reason in some instances. And women’s healthcare needs are different from the men who have been making the rules for so long.

I marched because while I have a lot of options open to me, there are still limits placed on women and girls. It happens to men and boys too as people are taught about what is expected of them in our culture. Smile, it makes you prettier. Man up. It can impact everything from the possible fields of study to hobbies and it certainly impacts jobs, income and for some it results in hiding pieces of themselves due to shaming they would face.

I marched because the phrase boys will be boys has been used too many times to justify behaviors that are frequently not ok for boys and girls in my family and communities. Women and girls should be proud and protective of their bodies and know it deserves respect. Men and boys should learn that respect as well. The shaming that goes on, the harassment that turns into physical violence, none of that is okay or normal and I wanted to be sure I pointed that out.

It Is More Than 1 Day

For me, this march is really a personal commitment. It is about participating more fully in the political process. About knowing that I have really done my part to let elected officials understand my thoughts on a range of topics that come up politically. I truly want more people to understand my thoughts whether they agree with them or not, because maybe that would reduce some of the polarization and ensuing nastiness in all of our timelines.

I love knowing I had friends and family also investing their time to be introspective, to consider what more they could do — some starting with a 15-hour bus ride one way to be sure DC hears it — while others of us focused on the homefront. I hope this day continues to the weeks, months and years ahead. What’s awesome is knowing there were thousands of other who may be thinking the same here in St. Louis.
[clickToTweet tweet=”Interesting to see the various reasons @JPlovesCOTTON was in the #STL #womensmarch” quote=”My twitter followers may find this interesting too”]

0 shares
« That Time I Attended the Presidential Inauguration
We Heard Her Scream “Help!” »