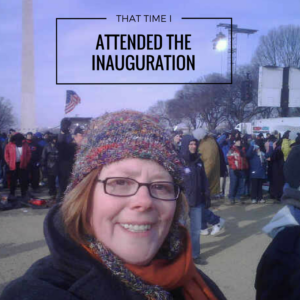 Years ago, before I blogged, I had what I assumed was a once in a lifetime opportunity. It was something that I had never really thought about doing and I am not sure I knew anyone else who had ever done this unless they lived in DC metro. I had the chance to attend a Presidential Inauguration.

Although I’ve thought about how polarized the conversation about the current inauguration is, I am going to try and just speak to my experience attending an inauguration. Hopefully this won’t degenerate into something else.

Let me explain a bit more and share some photos.

Learning the Possibility is Out There

It was probably October when I first found out that I would be going to metro DC for work in January. When I looked at the calendar getting things scheduled, I realized it was the week of the inauguration. Meetings would be starting the afternoon of January 21, so flying in a day or two early would mean I could be in DC to see a President sworn in.

The hotel was closer to Dulles and still, we had to get reservations confirmed early. I decided to go for it before the election was even held. I hoped the person I was voting for would win but decided either way, I’d go. I mean, there had only been 50+ inaugurations in our history and I had a chance to see one.

I thought others headed to town for the meeting would also want to take advantage of the chance, but holiday travel is hard and this meant traveling on Martin Luther King Day, something I thought was fitting.

Hotels and flights had to be figured out early to be sure I could swing it all. The prep got real when temps dropped to the teens. Everyone knows how much I hate winter, so going ahead with a day that meant standing outside for hours on end wasn’t paradise, but my candidate had won and the buzz around it was so uplifting.

I figured out transportation into town. I found out friends would also be in town. We decided to meet up after it at one friend’s apartment. So glad we didn’t count on finding each other that morning because the crowds went on for days.

Looking back, I should have reached out to my senators and congressional members. But I was also fine to be in the crowd. 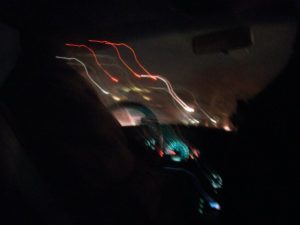 Once I was there, I did a check with the hotel staff to true up plans. They agreed I needed to go incredibly early as everything pointed to a history making crowd. Decided to leave while it was still dark to be sure I was there in plenty of time. I arranged the cab that would get me to the train station and slept a bit.

As we came up to the train station, we noticed how far back the line was going…. it actually was around the garage! I couldn’t believe it! 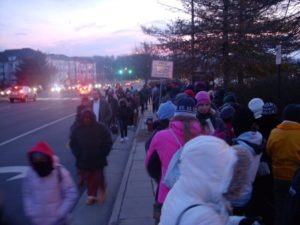 Since I was on my own, I really loved that the crowd was all friendly and upbeat. While I didn’t know the folks around me, it felt like I was surrounded by my people. There were impromptu sing alongs, chants, and lots of laughter. The lines went fast since we were at the start of the train line — we really loaded it up and then more people hopped on at the few stations we stopped at.

Ended up I was on the mall almost 2 hours before the inauguration would start!

Checking Out the Mall 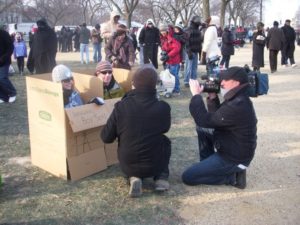 Since I got downtown so early, I wandered through doing some of the best people watching of my life! Seriously, so many characters! All so happy too! I mean check outt he box seats those folks got. And everyone had cameras a plenty and lots of video was being shot.

Looking at the size of the mall, I thought there was no way it would fill up, but people poured in for hours. 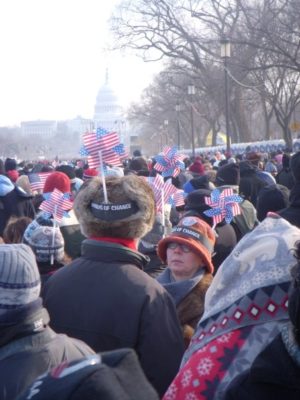 The jumbotrons played the star-studded concert that had welcomed the President-Elect and family to town just a day or so earlier. sometimes the crowd would stop in its tracks to sing along to something or hear a really poignant part of the recorded program. I kept wandering aimlessly, moving from the Washington Monument, slowly toward the Capitol though I stopped long before getting there based on the crowd density. Some groups had themes illustrated in the hats they wore or something.

This was in the age of my flipcam…. I shot video, knowing I’d want to remind myself of the day. I posted it on my personal Facebook page but goodness, I have no idea where the files are now. I hadn’t watched it in years, and I now think I have better quality camera on my phone and have gotten better with using it too. But I love how much watching this video brought back to me…. I remembered how gracious everyone was as we bumped into each other. I remember strangers offering others an exgtra scarf or hat. I brought a bottle of water but that coffee looked good… folks just poured some up and I don’t even drink coffee! 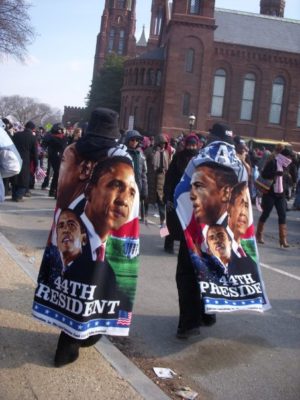 There were souvenirs everywhere — somewhat official ones and the kind people brought from home to trade. I decided to keep my hands free for the day — focusing on photos rather than tchotchkes and tshirts. I had to buy a few buttons though. Others bought things that would keep them warm…. These throws have stayed vivid in my mind even if I hadn’t seen the photos in a while.

But more than anything, what has stayed with me was the number of people who shared smiles with so many strangers. All of us energized by the hope we had for the future. The outlook was different for others at that time and now, we are looking to be sure that the advances we have seen in so many areas continues. This week’s inauguration will certainly be different…. but my interest and commitment to a world that is better for my nieces and nephews is not going away.

0 shares
« What do farmers do in the winter?
Why I Marched for Women in St. Louis »