On the Today Show this morning, I saw a VERY BRIEF clip about Bethlehem and fighting inside the Church of the Nativity. It was so brief, I immediately hit the rewind button. I had to try and process it. The piece simply said that priests of different orthodox orders clashed with broom sticks and the fight had to be stopped by police. The video shown was police with batons. From there I headed to Google News where I found BBC coverage of the conflict within the Church of the Nativity:

Scuffles have broken out between rival groups of Greek Orthodox and Armenian clerics in a turf war at Bethlehem’s Church of the Nativity.

Bemused tourists looked on as about 100 priests fought with brooms while cleaning the church in preparation for Orthodox Christmas, on 7 January.

Palestinian police armed with batons and shields broke up the clashes.

Groups of priests have clashed before in the church, built on the spot where Christians believe Jesus was born.

“It was a trivial problem that… occurs every year,” Bethlehem police Lt-Col Khaled al-Tamimi told Reuters.”No one was arrested because all those involved were men of God,” he said.

Nobody was seriously injured in the scuffles, according to the police.

That video looks a lot more like a scuffle than the incredibly brief shot I caught on the news. 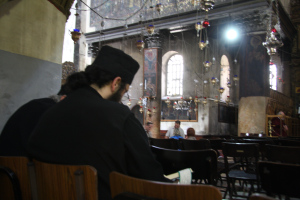 The “scuffle” probably made most Americans wonder how something like that could happen in the Christmas season with priests knocking broomsticks. But I have to tell you, Bethlehem that I had always pictured didn’t match the one I saw.I’m guessing that’s because I pictured the nativity like the sets I have in my home or at church. But in Israel, churches mark the spots where major religious events happened. That’s definitely true of the scene of the nativity. And with the differences in religion, I found it a bit shocking that there are multiple altars on the grounds of the Church of the Nativity, with different church factions or denominations controlling different areas. However, there is also some shared space. That’s where the problem came no doubt.

I should also note that I had not realized Bethlehem was a Palestinian controlled area. To get there from Jerusalem, we went through heavy security checks as we worked our way there. The Church of the Nativity is not an area we could reach with our bus so we had to park and walk up through a neighborhood, past the police station, UN peacekeepers, etc. It was a bit different than I expected and while I felt safe, I also felt the situation can be tense.

I was on a pilgrimage with a group of Catholics. We held mass in the Catholic Church, but there were several other sanctuaries and altars we visited. The people in Bethlehem were gracious hosts and I think the scuffle on the news likely made it seem much more dramatic than it was, but that’s part of what TV can do. I went ahead and uploaded a bunch of photos from the neighborhood, the church and altars, I hope you enjoy them.

You can see more of my trip to Israel on these posts:

0 shares
« A Fantastic Traditional English Pub Near Reading
Have you met a starchitarian? Or do you wonder what that even is? »