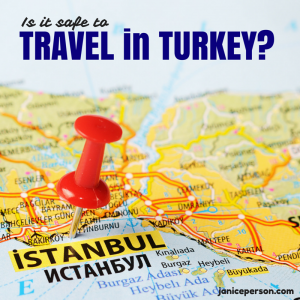 As I mentioned in my post about my going on vacation under the radar, security was one reason for me keeping my social media sharing about my Turkish vacation to a group of under two dozen people.  A lot of people have raised questions about security in Turkey for good reason:

Safety and security was definitely being thought about as I was planning my trip, especially knowing I would be there on election day. I looked for factual information and for my trusted voices rather than the general buzz online.

My Experience in Turkey 2015

Knowing locals who I trusted to give me direct information, I went forward with a trip that had been discussed casually for five years or more. Although I can tell you about a few things that I felt were unusual, I generally felt safe taking the same types of precautions I do generally when traveling.

In Turkey as in most parts of Europe and the US, you should take care of your belongings, particularly in a big crowd. Keeping valuables in the hotel safe unless I needed them with me usually makes good sense — I don’t want my iPad stolen in Antakya anymore than I do in Atlanta.

When traveling, I tend to stay aware of the people around me, particularly if I end up in a big crowd. With crowds anticipated, I tend to wear a cross body bag and keep a hand on it as well. Remember, the cultural difference may make it harder for you to really understand the mood of a crowd. 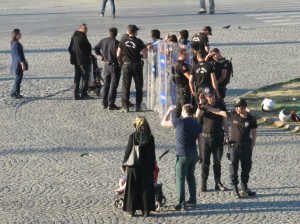 During my first visit to Turkey, I took a taxi to a famous mosque & had charted my walk back to the hotel through the campus on Istanbul University and the Grand Bazaar. However, after leaving the mosque, when I turned a corner, I realized there was a massive group of police in riot gear standing at the university’s gates. I simply headed for the bazaar and stayed close to the perimeter so I could exit if something went awry. I didn’t hangout much that day.

After talking with Turkish friends, I realize this is far more typical in Istanbul than it is here in St. Louis so on this visit as I saw a lot of police while touring with Nilay. So as I got to Taksim Square the night Galatasaray fans would be celebrating the futbol championship, I went ahead with plans to shop. I used the vibe there as my baseline for normal and though I will say I stayed aware of various shops or hotels where I thought I would go if there was a radical shift in mood, none of that was necessary.

I like to walk around neighborhoods, but I take time to familiarize myself with maps before going out. Asking at the hotel desk about areas you may want to walk around is a great idea — the hotel staff has a vested interest in making your stay nice. Also be sure you grab a hotel card so if something happens and you get lost, you can ask a local merchant for help. Choosing who you get help from is a good rule as the one person in a whole neighborhood you don’t want to deal with may be the one who senses you are lost.

Since it is sometimes nice to have a simple checklist for safety, I wanted to put together a few tips for international travel with a bit of explanation specific to Turkey when needed.

As you have probably guessed, I decided it would be safe to travel in Turkey, even with the added challenge of being a woman who would travel solo some of the time.

0 shares
« Racism, History, My Family and Looking Deeper
It’s Time for an Ice Cream Cone! And Show from Turkey (Video) »