I have to admit that writing all of these A to Z posts is really making me think a lot about the city I now call home. And while several of the topics here are related to a specific bit of history or a specific place, but for me that’s helping me patch together this quilt of my new hometown. It is especially the case with words I’ve heard without having an understanding of local history. That’s definitely the case today. 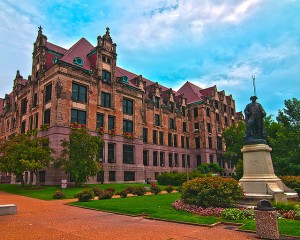 In St. Louis, there are quite a few things with the Laclede name on them. One of the places tourist hear about is Laclede’s Landing, an entertainment district that’s next to the Arch but locals are likely to know Laclede Gas. But the Laclede name is used around Missouri because it has a serious origin — Pierre Laclede, a French fur trader is credited as the founder of St. Louis.

Pierre Laclede came up river in late 1763 to establish a town where the Missouri and Mississippi Rivers came together. After having checked that immediate area, he decided to build a bit south to provide firmer ground. The settlement “Laclede’s Landing” was the location that over time built into a working neighborhood of warehouses and is now the entertainment district.

The role of St. Louis in the western expansion of the U.S. has been made clear in several posts, it may not have been obvious that Lewis & Clark started and ended their expedition in St. Louis. In case you are driving around in St. Louis and don’t know that, you will actually see signs for the trail that Lewis & Clark blazed leading up the Missouri from St. Louis through the Dakotas and west through Montana. According to National Geographic:

In 1803 Thomas Jefferson sent Meriwether Lewis and William Clark’s Corps of Discovery to find a water route to the Pacific and explore the uncharted West. He believed woolly mammoths, erupting volcanoes, and a mountain of pure salt awaited them.

What they found was no less mind-boggling: some 300 species unknown to science, nearly 50 Indian tribes, and the Rockies.

This one goes onto my to-do list. The Lemp Mansion is a restaurant and inn that was built as brewery by John Adam Lemp who’s credited as starting St. Louis down the path of an important city for breweries. The building was later converted to more of a showcase by William J Lemp in the 1800s & early 1900s.

A to Z for St. Louis & Agriculture

This year I am doing a St. Louis A to Z — would love to know what you think I should be writing about! You can also check out last year’s A to Z of Agriculture and the L post which was on loam soils!

0 shares
« St. Louis A to Z: Kemper Art Museum and Kiener Plaza
Climate Change & The Video that has Me Thinking About It »