Few Americans think of St. Louis without picturing the Arch on our skyline so it seemed fitting I put it here first and foremost. And the Arch is one of the top family adventures in the city. Anheuser-Busch also has a huge place in the city and just across the river is the town of Alton and on a recent top-down day, I decided it had to be part of my A to Z of St. Louis.

What should you know about the St. Louis Arch? 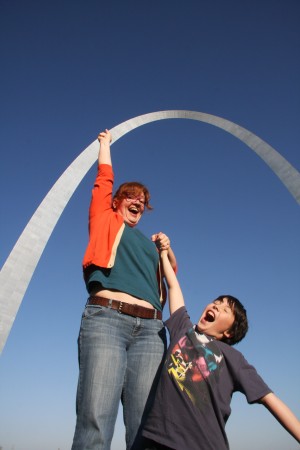 The Arch is is a monument to the city’s role in the US’s westward expansion and while that’s what most of us call it, the Arch is part of the National Park Service’s Jefferson National Expansion Park. It was built in the 1960s to celebrate the vision President Thomas Jefferson had in the 1800s when he sent a group of US Army volunteers westward to explore and map the newly acquired land (joined the US through the Louisiana Purchase). Lewis & Clark headed that expedition and were looking for scientific and economic benefits. After a couple of years, the expedition returned to St. Louis — maps & journals in hand — to report their findings to Jefferson.

Sorry…. got a little too far down the history path but before I get to today with the Arch, let me mention that the Arch truly is amazing in terms of engineering feats. While at the base of the Arch, you can buy tickets to the great documentary by Charles Guggenheim about building it. The movie is called “Monument to the Dream” (available on DVD from the park’s store or from Amazon) and is based on footage shot as the Arch was built. I love it so much I purchased a copy & tend to make it required watching for guests (like niece & nephew Georgia & Jake who I was able to get to do silly poses for photos)!

You can see for miles from the top of the Arch on a clear day but before you go down there. Kids (& I) really enjoy checking out every window and the sights below, whether it is the shadow of the Arch seeming to circle the helipad, the baseball stadium or the tow boats & barges going down the Mississippi.

Consider buying your tickets online via the <href=”http://ticketsforthearch.com/eStore/Content/Commerce/Products/DisplayProducts.aspx?ActivityGroupCode=10&ActivityCategoryCode=100″ target=”_blank”>Core of Discovery if you know when you want a tour and plan at least 24 hours in advance. Not only do you know when you will get in, but you can  also get free parking.  Adult tickets are $10 and kids (ages 3-15) are $5. Adults who have the National Park’s America the Beautiful card get a $3 discount.

Other St Louis As of Note

Anheuser-Busch is a St. Louis Institution

Since the 1800s, St. Louisans have enjoyed beers from the Anheuser and Busch families. Over the centuries, Anheuser-Busch has become one of the most recognizable names with the famous Budweiser brand creating iconic Super Bowl commercials. Fellow St. Louis blogger Denise Bertachi offered up a post she wrote about recently about the beer tour visit to the Anheuser-Busch Brewery with her kids.

As a St. Louis local, I feel I should point out that the company is actively engaged in so many areas of the city. The Cardinals play at Anheuser-Busch stadium and you frequently see the company’s name among the sponsors of cultural events, etc. 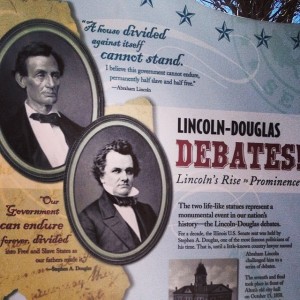 A couple of weeks ago, we had a beautiful top-down day and I decided to spend a couple of hours wandering the back roads of Illinois. I crossed the Missouri River into Alton, Illinois and took a different route. Next thing I knew, I saw a historic marker and turned to see what it was. I had no idea that the final one of the historic Lincoln-Douglas debates was held there!

Senator Stephen Douglas and the ambitious Abraham Lincoln held a series of debates during the 1858 election and each of them touched on the issue of slavery. The debate in Alton was the final one and though Douglas won his reelection, the debates launched Lincoln on the national stage and he edited the debates into a book following the election further capitalizing on his stance. And the debates led to Lincoln’s winning the presidency in 1860.

This is one that I’m not familiar with but will be checking out thanks to my friend Danielle adding it to the A to Z list! I had to Google it….. sounds like the kind of restaurant I could get behind though! I mean just read this description from The Smokehouse’s website:

Since 1937, once nestled in the middle of cornfields stands the Smokehouse Market. An unpretentious structure, reminiscent of its days as the market for the surrounding Chesterfield area. The store now houses one of St. Louis’s most celebrated restaurants, Annie Gunn’s. Within its walls, Chef Lou Rook, III works his magic, creating irresistible cuisine with a sophisticated country life accent. In keeping with the concept of “Foods and wines inspired by the richness of country life”, Chef Rook uses the best ingredients and the traditions that are most appropriate to them and imbues them with his own talented creative spin within the rhythm of the seasons.

The A to Z series about St. Louis will go on with hopefully six posts going up each week (everyday but Sunday) in April. Feel free to suggest topics for the upcoming letters or call me out for missing a critical piece on today’s post. You can see what else in St. Louis gets a shoutout in the A to Z or check out last year’s post for A in my A to Z of Agriculture. It was the kick off post on A is for agriculture. And you can browse a list of almost 2,000 bloggers doing their own A to Z Challenge.

This blog is part of the communications efforts by JPlovesCOTTON LLC.
3 shares