What comes to mind when you hear the phrase Cherokee Strip? If you have spent time in northwest Oklahoma, you probably come up with the right answer but my guess is a lot of Americans have never heard of the Cherokee Strip.

I got my first lessons on it when I went to Phillips University, a small liberal arts university that was in Enid, Oklahoma. The university was one of several in the US to close due to really tough economic times but it remains an active part of the lives of its alumni, some of who participate in a legacy project. And although I’ve thought about the Cherokee Strip several times, it wasn’t until I saw a recent news article on Google Buzz thanks to Becky McCray (Twitter, website) that said a new Cherokee Strip Regional Heritage Center’s (Twitter, Facebook, YouTube, blog) grand opening is this week — Friday, April 1.

“Enid has a history that reflects the courage and tenacity of American pioneers,” said Lew Ward, board chairman of the Cherokee Strip Regional Heritage Center. “The center’s collection shares these stories and the history of the area through engaging exhibits and a Smithsonian-quality experience.”

At the center, visitors learn about the 1893 Land Run – the largest land run in American history opening 6 million acres to settlement. Visitor’s also explore how the Cherokee Strip was formed, life on the prairie, the Dust Bowl, area railroads, agricultural development, the discovery and development of the oil industry and Phillips University, the first private university in the state.

On Sept. 16, 1893, Enid’s only permanent structure was the newly constructed U.S. Land Office. By sundown, an estimated 10,000 people inhabited the new town. The center’s living history area, Humphrey Heritage Village features the U.S. Land Office as well as other authentic historical buildings including a 1902 Church, an 1895 one-room school, Turkey Creek School, and the 1905 Victorian home and family belongings of J.W. and Alice Glidewell. Visitors touring the Village get a comprehensive look at what it was like to live in the Cherokee Strip in the early 1900s.

My Learning About the Land Run 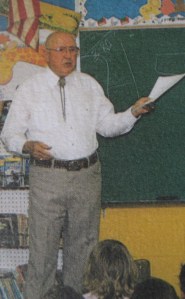 I didn’t learn about the Cherokee Strip in some history class though. Nor did I read about it in the media. I learned about it directly from someone who owned a farm claimed in that land run — none other than the great Dr. Tibbie Shades who taught the more unique versions of literature on campus. In Tibbie’s classes (we all respected him completely but somehow his down-to-earth nature led us to , routine thinking and writing essays were far more important than memorizing. He didn’t give tests because he was sure  I think he would have LOVED blogging!

Tibbie didn’t get to make the land run on the Cherokee Strip with his family, he didn’t come along til 20 years or so later, but growing up, he had the chance to hear about the land run from family. He learned the stories and wanted to be sure they were passed on. He loved sharing the stories through the oral history he gave so many of us but also wanted to capture them on paper. He was compiling the stories when I graduated and it was soon published as “Children of the Cherokee Strip: True Stories of Those Early Days.” (The book was published by the University Tibbie called home so its hard to find but used copies are sometimes available on Amazon or other sites. ) 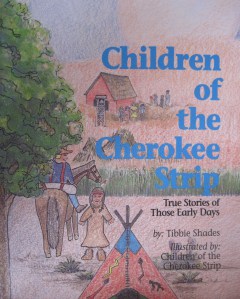 Having had classes with Tibbie, I would expect his retelling of the stories to be distinct and his book is in several ways. First, you see the difference when you glance at the cover as Tibbie told stories to elementary school children who provided the artwork! You have to wonder whether those kids have continued their connection to the Cherokee Strip land run and whether some will be at the museum’s grand opening this week. I also wonder if the person farming the Shades family’s claim will be there. (Tibbie died in 2002 at the age of 87.)

Because the book is so hard to find, I want to share the editors’ notes with you. Please note the bolding of some text is mine and done for emphasis that I want to pull out:

The people of northern Oklahoma are a hardy breed. Their ancestry is as varied as the land to which they cling. German, Scotch-Irish, Russian, Afro-American, English and others came to the Cherokee Strip in search of land. The run of 1893 is both a story of great sacrifice and great self-indulgence.

Settlers carved out a place for themselves with very little regard for the Native Americans who called the area home and even less regard for fellow pioneers who got in the way of the pursuit of land. Yet there were countless individual acts of compassion, both toward the Native Americans and toward fellow settlers. To understand this seemingly incompatible behavior, one must understand the power of the land over these pioneer people.

To the settlers of the Cherokee Strip, land was the Holy Grail. After one-hundred years, the people of northern Oklahoma still cling to the soil as if it was their immortality, It becomes both the honor and the burden of each generation to keep the Grail in tact.

Although I’m unsure who is farming the Shades claim now (as I remember Tibbie & Virginia Shades were teachers who had many kids who claimed them but who did not have children of their own), I know people who are in that area as well as other farmers who honor that ideal in other places their families staked claim to. I’d like to introduce you to some of the hardy folks I know who honor the land and the soil.

Becky McCray (Twitter, website), who I mentioned above, is also in northern Oklahoma and her husband’s family came to the area in the same timeframe as the land run. She’s a small business person and lives on a ranch that she talks about through her “Out Standing in my Field” blog. Most recently she’s been keeping those of us in social media up on the condition of Bubby, a calf that has faced a tough time since being born in early February. But as you can see  he’s doing well and has become big and healthy!

There are lots of other farmers who place priorities on the land and keeping it in shape for future generations. You can find dozens on my lists of farm blogs — the comprehensive list, a list of some of my favorite farmer bloggers, a list of farm moms whose blogs I read, people who are studying ag or starting careers and there are lots of farmers who don’t blog (though I’d love to think they are becoming fewer all the time LOL).

What connections do you have to the Cherokee Strip or to the Holy Grail most of us call land?

0 shares
« Spring Floods Hit as Snow Melts, Rivers Near Crest Stage
Listen to What the Other Guy Has to Say, He May Be Right »