Spring 2011 is officially here. For some friends, that was realized when they saw the first robin in their yard. For me, it seems to be when I am drawn to a drive with the top down in my car. For a lot of farmers though it could be when they first hear planting reports coming in or when the snow pack melts. 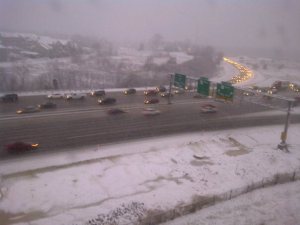 I realized the difference in how people in the extreme north (said cause it’s both far away and the winter is unimaginable to me! LOL) started talking about their signs of spring. The first was a tweet from Emily Zweber of Zweber Farms just outside of Minneapolis saying something about the robin she saw but the blog post she wrote about her boys in the mud, well, that certainly made me take notice! But her farm boys aren’t the only ones drawn to be outside in the mud, cause Katie’s daughters had their turns. And since both of these ladies were snowed into Atlanta with me, we have certainly talked about snow this year! While I’m really hopeful I’ve put snow behind me with the last snow on March 14th!  (I celebrated spring with photos yesterday.) But the winter snow of 2011 will haunt a lot of us well after Emily’s boys can play outside in regular clothes!

There is immeasurable anecdotal data on significant snowfall. You can check out the reports from individual farm bloggers:

There are people who have run the numbers too, and knowing some areas anticipate more snow this week, I’m assuming final numbers are forthcoming. But this gives you a snapshot of Illinois from the state’s climatologist blog:

via A Cold and Snowy Winter in Illinois « Illinois State Climatologist.

And there is plenty more where that came from! While the snow and other precipitation may have been the big news for some time, it’s clear to me now that we need to be really worried about where all that is headed.

Floods in the Mississippi River Basin

Looking at how widespread this heavy snowfall was, and how much of the US drains into the Mississippi River, and where I’m located…. well, I bet you see where I’m going.

Every time I look up, I’m seeing something about water. It’s still raining and snowing up north and yet, we already have quite a bit of flooding. In fact, the Memphis news stations are talking about the fact that although many along the Mississippi River are familiar with flooding, this year is already higher than average and homes at Tunica Lake have already seen water coming in. 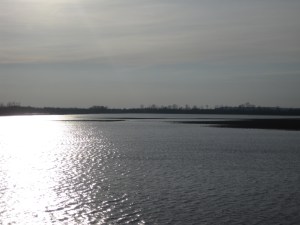 The reports calling for widespread flooding are all over the place and from what I gather, that means it won’t be just the areas that regularly flood — like the fields friends farm call their “river ground.”  River ground is low lying close to a river and tends to be wet in spring. These fields tend to be planted later than most in the area. And as you hear in the TV clip, the Mississippi is expected to crest here in the Mid-South in the next day or two. Once that crest passes, hopefully some or our smaller rivers can flow more freely. Those smaller rivers were responsible for significant flooding during last spring’s torrential rains that blew out a lot of the smaller levees. I am hoping that the repair jobs undertaken hold! For me personally, my house is not in a flood plain and at least since I’ve lived here, my neighborhood has fared pretty well.

@JPlovesCOTTON they are predicting record flooding for the upper Miss, Sandbags are already up floodstage not expected till the weekend

Kevin told me & I believed him but, I’m a visual learner so looking at the map from the NOAA that Agri-Pulse has on its article showing the areas of the upper Midwest that are expected to have more flooding than normal knocked my socks off! And now I am wondering about all the people up river who like me are tired of bad weather and just want some nice days!

What impacts do you anticipate on your home, farm & community? If projections are for issues in your community, I hope your home and farm fare well and that we all catch a break. May be wishful thinking and I’m okay with that — I’m going to keep wishing!

0 shares
« Weekly Photo Challenge: SPRING! It is finally here!
Honoring Oklahoma’s Cherokee Strip and the Land as the Holy Grail »