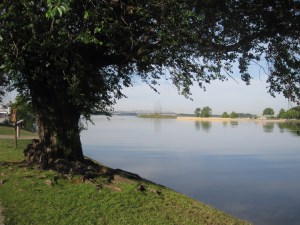 As more folks learned more about the flooding in the Mississippi River basin, Some cities & towns are breathing sighs of relief that this flood that is close to a century in the making wasn’t worse and others are fighting a long battle. Wednesday as I drove along the river, I took a little time to observe and document.

Starting out at home, I headed west to the river and took some photos from one of my recently familiar spots in Jefferson Davis Park at the Memphis Visitors Center on the River. I was amazed by the difference from a week ago when I was down there as the river crested. Since then, it has gone down four foot! Suddenly, the river bank is returning and park benches are on solid ground again. 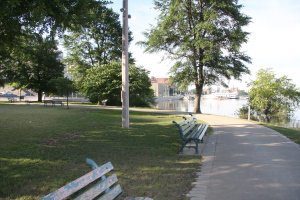 The sidewalk I had walked on, that had been flooded with nasty water, was back in order. And the sign that I watched disappear into the murky mess, was almost fully uncovered. But the most striking thing I saw, was the waterline through the park, strewn with the smaller pieces of driftwood and various sorts of trash and the larger pieces of driftwood, seemingly full grown trees laying here & there.

Although there are lots of things that need to happen for downtown and low lying neighborhoods to be back to normal, it is underway. And positive signs are popping up. The biggest sign was one that I was alerted to through Twitter hours later:

The Memphis in May Sunset Symphony will be held at Tom Lee Park this year.

MIM officials decided today that the Mississippi River flooding that forced the World Championship Barbecue Cooking Contest to move to Tiger Lane last weekend will have eased up enough to allow the annual concert to go on in its usual spot on May 28.

“The river is already down and we’ll move our operation back out there on (next) Wednesday,” said Diane Hampton, executive vice president of Memphis in May. The river crested at 47.8 feet and at 3 p.m. today was at 42.87 feet.

She said that they weren’t sure of the power situation as yet and that they might have to generate their own at the concert.

“I’m tickled that we’re going back,” Hampton said. “The return to the river is important.”

Going back to the banks of the Mississippi resolved one problem. Airspace issues would have made it difficult if not impossible to present the Commemorative Air Force Air Show that plays out over the river the afternoon before the concert.

The 2011 concert will again feature the Memphis Symphony Orchestra led by associate conductor Stilian Kirov. Guest artist is the legendary group The Bar-Kays doing a tribute to the music of Stax Records.

via Memphis in May Sunset Symphony set for Tom Lee Park » The Commercial Appeal. 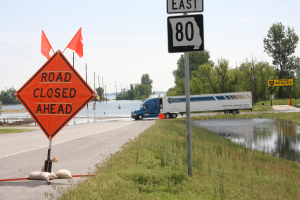 As I headed north on I-55 through Arkansas, farmers were busily working in the fields. The wheat crop looked strained for the sun it was now basking in!

Time goes fast when you see farmers at work. And I was well into the Missouri Bootheel when I decided to stop briefly for a break. As I turned off the ramp, I was astounded to see water. The truck stop in Matthews was open and running fine, but the second driveway was filled with water. I took a little time to take photos & was amazed by the clouds of insects forming all around. 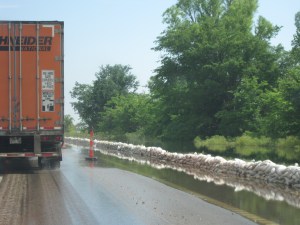 I saw the fields that were flooded and businesses & people trying to carryon as if everything was normal. It was just a few minutes later when traffic slowed to a crawl because water was on Interstate 55. Let me make sure you get this. THE FLOODING WAS IMPACTING INTERSTATE TRAFFIC! There were sandbags along the roads. Work crews & equipment all along the way but there was water on I-55 more than a week & a half since the levees were blown!

I’m sure that I wouldn’t have had to go far to see water in people’s homes. And as I was looking out along field after field underwater, I thought about how long this water may be there…. with the majority of the levees in tact, I’m assuming most of the water will not receded the same as it had in Memphis along the banks. It will be easy to have standing water for quite a while.

Down River in Louisiana

Today, I also got word from my newly made friend in Louisiana — you remember Doris from the podcast. 🙂 Doris sent an email apologizing for running at breakneck speed as the plane emptied in Memphis saying she was worried about making her connection. Since we were delayed & Memphis was the end of the line, I waited til folks in a rush from the back of the plane deboarded. She was also nice enough to send sympathies on the Grizzlies loss.

But word on the developments based on the opening of gates in the Morganza spillway north of Baton Rouge, was the draw for me. Doris wrote:

The river is doing well and it looks like the Corp of Engineers are working on mitigating the damage to the Atchafalaya Basin by only opening 25% of the gates on the Morganza spillway, this is helpful to my relatives that live down near the mouth of the basin.  The river here is still really high, it still amazes me, they’ve closed the levees so I won’t be able to send you any picks but if I see any news reports that show decent pictures I’ll pass the link along.

I have to say it again. Me & my family are so thankful that this flooding seems to have had such a small human toll. Granted, the financial tolls continue to add up in ways my simple math skills will NEVER understand. We were lucky to be on high ground. To have neighborhoods that had no water or very little water throughout this historically high flooding in other neighborhoods.

Lots of people, including folks along the drive to a neice’s school & fellow Memphis residents as well as Doris’ family & others, have not been that lucky. Don’t forget to consider what you can do to help. Among the ideas:

0 shares
« If You Love Bacon, Have I Got Ideas for You! Blogging & Shopping!
Do you ever get travelsick? I do! I get it really bad at times! »