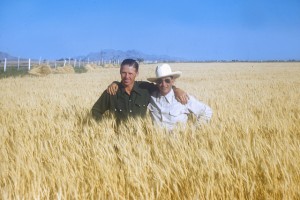 I bet all the talk this week about Norman Borlaug this week has been a bit hard for some to understand. And I think maybe I got caught up in the buzz and didn’t step back and really explain why I would have such awes of a man I never met. If you aren’t sure what the buzz is about, I beg you to watch the video below.

The humility of a man credited with saving the lives of a billion people born into poverty…. when asked about it, he says if he did anything, it was lead a team. That is leadership that few people understand. And that team is truly global in scope and continues to inspire new hunger fighters to join!

He had vision…. A unique understanding of the pressures that build up in remote places when there is hunger. True hunger leads to strife that not only topples governments but it results in scapegoating that crosses borders. He says “We’re gonna teach you to be rebels. Not with guns and daggers. But with science and technology.”

This video really captures that, in his words. From the Nobel Prize speech in the 70s to a return visit to Mexico in his final years.

And the reason the buzz has come up this week is he would have turned 100. To mark it, Iowa unveiled a statue of the Iowa farm boy in the US Capitol and the International Maize & Wheat Improvement Center in Mexico (CIMMYT which is where he did the bulk of his work) held conferences to celebrate the accomplishments of that 100 years and look forward both.

Oh and if you are someone who appreciates him, you’ll want to watch this too.

0 shares
« Can you sit idly by & see population grow faster than food production?
Joining the A to Z Challenge By Doing a St. Louis A to Z »