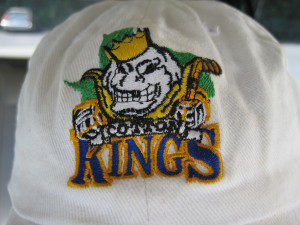 For a city girl, I have to admit I’ve had my share of sports mascots with farm-related themes to them. The revelation came to me recently as I looked for a way to camouflage a bad hair day and pulled out my Lubbock Cotton Kings cap (photo at right). The Cotton Kings really stood out for me cause I was working in the cotton industry when I first saw it and I loved that someone was twisted enough to black out the teeth on a cotton boll. They changed logos going for a shield that was far more respectable before the team suspended operations.

But I have crossed paths with several other really strange agriculture- or farm-related mascots that are definitely worth mentioning.

Of course there are those high profile teams with an ag connection like the Huskers from the University of Nebraska, which at one time used the BugEaters as their mascot. I have to say, that makes the Phillips Haymakers sound way better… Nebraska BugEaters? Really? I saw a tweet from the @CobSquad that read “#FunFact  #UNL “Cornhusker” football team was know as bugeaters until 1900.” Not sure why I can’t find it now but I verified its accuracy on the university’s site. I can’t decide whether bugeaters are ag-related, they could be the parasitic wasp sort of thing right? And I’m pretty sure farmers would enjoy having bug eaters around when pests are taking their toll on crops!

Before I go, I know this isn’t an exhaustive list but I found another blog post that talks to some of the other ag-related sports team mascots.  You may enjoy it, I did.

Do you have any other farm-focused teams I should know about, be cheering for or consider a purchase of merchandise?  It seems I’m getting quite a collection!