One of the greatest benefits to the career I lucked my way into, is the people. I really think that’s how I landed in agricultural communications and I know it’s a major part of the reason I’ve remained. From the first time I went out on a cotton farm to do my first story til conversations I had late last week, I’ve had the benefit of getting to know incredible people.

To know the incredible people I’m talking about, you need to slow down and take the time to talk  to people. Learn their story. Live in their communities. The reason I say this is that some of the most incredible folks I’ve found stay clear of the limelight every chance they get. 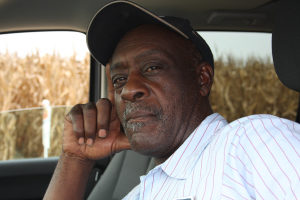 Last week, one of those incredible people who ducked my camera for more than a decade before giving in and letting me take a picture now and then, got a little recognition. But long before my camera’s shutter ever caught Sidney Miller, I had a detailed photo of him in my mind:

In Sidney’s 52 years of work with Delta and Pine Land Company and Monsanto Company, my guess is he ducked the cameras hundreds if not thousands of times. No need to draw attention to himself because a job well-done was enough. But he did take a little time recently to talk with a couple of people from St. Louis and the resulting article was posted to the web last week. It’s great as Sidney talked to Tyne about some of the changes he’s seen in the five decades he’s been working in the small town of Scott, Mississippi. That article captures him so well. But then again, so does a photo above that I took a year or two ago.

I hope you know a Sidney Miller, even if it’s not the same guy I know. They are the incredible people that keep this world moving forward, slow and steady, progress being made everyday. I hope I leave such a great legacy of a job well-done when I retire.

0 shares
« Sports Mascots with Farm Connections
Wordless Wednesday: Together We Can by My 8-Year-Old Niece »