I had a few thoughts on True Grit that I wanted to share. If you read my previous post on True Grit, it is clear that I loved the movie. I was pumped to see the movie got 10 Oscar nominations with five of the “big categories” including:

The movie & my previous blog post on it and cotton resonated with Jeff who has family in that area. He added a comment on the previous post:

I just saw the movie Friday night and also picked up on the Yell county reference. It’s near to my heart because that’s where my grandparents farm house (still standing today) is. We still own that property and I can recall that my grandad used to tell stories of cotton picking there. For a couple of summers, the former baseball great, ‘Dizzy Dean’ worked for my grandpa picking cotton, before he became pitcher for the St. Louis Cardinals. Guess lots of history came from the area. Sorry to say that not many are still around to fill us in with the little tidbits anymore.

The images of Dizzy Dean picking cotton for Jeff’s granddad got me REALLY interested, as did the fact his family still owned property. So I shot over a followup email. Loved getting this!

I apologize for the late response – have been down with a bad cold.  Feeling a little better today.  I can’t say that I’ve got any more cotton stories for you but I thought it’s interesting that Mattie Ross said (in the movie True Grit) that she was from a farm near Dardanelle, Arkansas in Yell County.  I know we spoke of my grandparents’ home and that it was indeed in Yell County, but it’s also just outside of Dardanelle.  It’s located in Harkey Valley.  I’ve attached a recent photo, taken in December 2010, when I went there for the weekend to mow. 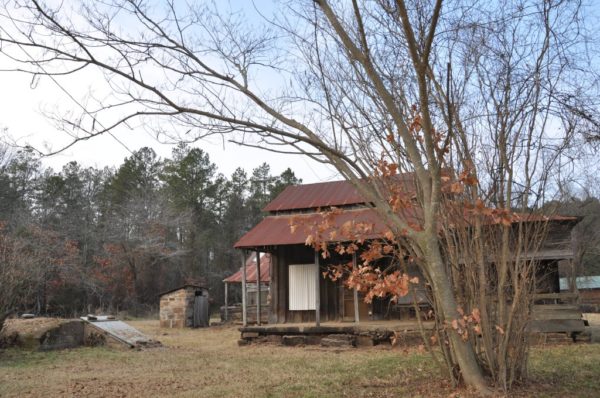 Thanks so much Jeff for sharing the photo &  a bit more about Yell County! We’ll all be crossing our fingers as the Coen brothers, Jeff Bridges and Haille Steinfield take their spots on the red carpet!