In February, I wrote a post asking about places and things I should see as I get to know the Midwest. One of the people who took time to give me his ideas was Matt Eddy aka Twitter’s @aged4me. Matt had simple suggestions for me as I asked my questions:

Where are you or where do you think I should go? Some of the unique sights or experiences nearby? Iowa State Fair — more specifically our FFA chapter hosts the Animal Learning Center. Baby farm animals being born daily.

When do you think a trip is best? Aug 9-19th – special VIP tour of Learning Center. You could be lucky enough to deliver pigs/calves/sheep/goats?!?

So, as I headed to Des Moines, I gave Matt a shout and he said he was still up for it and he agreed. We traded phone numbers and agreed I’d be in touch when I got on-site so we could figure out what the day looked like. I may have been naive, but I really didn’t do any additional research. A lot of friends kept reinforcing the idea that the Animal Learning Center was a must see. 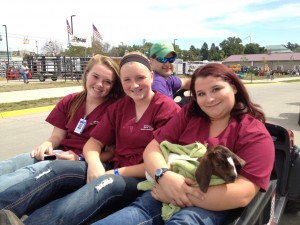 VIP Tour of the Fair!

So…. When I got into the fairgrounds, I called Matt and he said to come on by cause he had a bit of time. I got there and called again, realizing I had no idea who I was looking for in a crowded building that’s probably as big as a football field. He said he was on the other end of the building in purple scrubs. I walked down there and he said he needed to go pick up some students so we could hop on the cart for a tour along the way. Once we got to the opposite side of the fair from where we started, the students came out with a kid (baby goat) wrapped in a blanket. 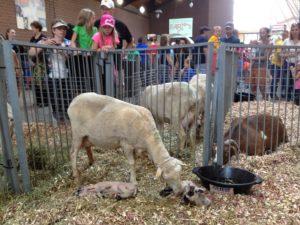 Back at the Learning Center, Matt continued with the “VIP tour” by showing me the pens for the cows, goats, sheep and pigs. And I got to go in the area where the caretakers do so I was seeing everything incredibly close up!

There were a couple of cows that had calved the day before, a sheep that had given birth not long before I arrived and the mom was still trying to clean the new ones up & get them fed and moving. It was awesome to have someone who works with the fair throughout the two weeks of it, but as Matt told me more about the center, I realized Twitter & my blog had given me a priceless view of things! (And I later heard he was recognized for leading the state’s outstanding middle/secondary school ag education program.) 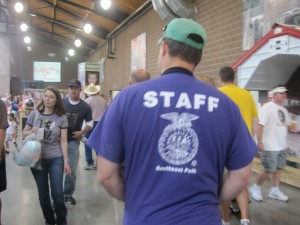 I noticed that Matt wasn’t the only one in the purple scrub shirt. There were a few more folks walking around in those and high school students in a deep red or maroon color. He explained that his students and supervisors who are past students, etc not only man the facility throughout the fair, but students are responsible for the car of the livestock throughout the year. He says a lot of the students aren’t from a farm background — Southeast Polk is in Des Moines so families there have a broad range of occupations. Since many students are interested in animals and veterinary science, etc.

Matt talked with me for a while about the FFA program and how they have come to work so closely with the Iowa State Fair organization. You’ll want to listen to what he’s got going on:

It was a great time had by all! lots to see close up too! 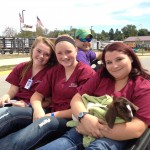 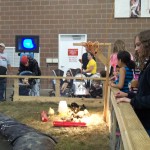 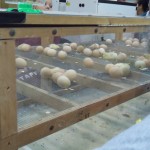 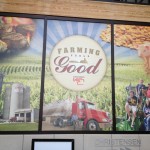 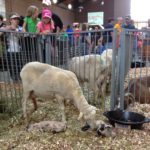 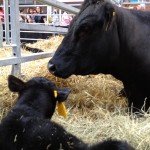 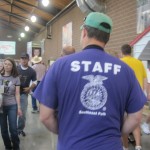 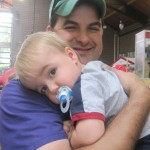 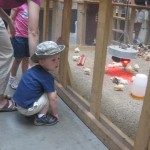 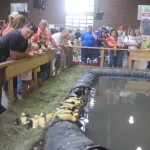 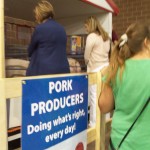 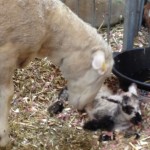 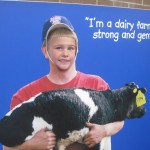 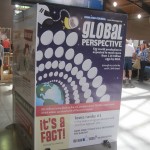 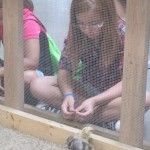 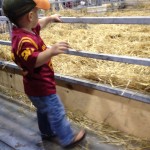