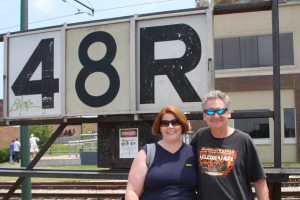 It has been quite a week to be a Memphian. Talk of the flood of 2011 seems to have started months ago (even I wondered how much the heavy snowpack would mean to us), but it really didn’t get my attention until I saw what was going on in the Bootheel just under two weeks ago. That’s when I started paying much closer attention to the River here in Memphis.

Somehow, it became part of my daily routine to post, usually with photos or video to capture what I was seeing & pass it along to others. I have had such incredible support from folks who are near & dear to my heart as well as people I had never heard of. Not sure how frequently I’ll be doing it in the next week, but I truly think I have increased motivation to write more frequently. Just more likely to be on some of the other many topics I enjoy!

Photos of Then & Now

Today as I looked out over the River, I wondered if I had photos to match up on some of these and so I’ve probably spent far more time than I should have finding photos that somewhat illustrate the same things. Not all are from the same angles, etc but I think I can help the connections be made. And remember, what we are looking at is simply the way the way came up in parks but the bigger deal is in how this impacted private property. Only thing is…. I really hated looking at peoples homes being ruined in the water. So I didn’t take many of those photos. I’m really comfortable with the ones I got content and design-wise.

Questions I’m Getting & My Answers

In the last week, quite a few friends and family have checked in. With the arrival of the network news & cable weather channels, concerned emails, phone calls, text messages and posts seemed to increase significantly today. So I may as well put them out here in the open for people who haven’t asked.

How is your house? Any water there? Your family?

We are all fine as are our homes. I haven’t seen any water in my neighborhood — none of the small rivers come through here and we are on high ground as is most of the downtown area. There are plenty of other areas of town not that lucky.

How’s it affecting your day-to-day?

Directly, only a small percentage of Memphians are impacted, some more are near enough to have some impositions like changing routes on routine drives.  I had a friend tell me earlier today she has yet to see any flood water. For me, I’ve been connecting with more folks in the city.

Why are people so focused on the Mississippi riverfront? It doesn’t look that bad to me.

Downtown is a great venue for folks across neighborhoods and backgrounds together. And our city has done a lot to encourage people to come downtown to use the parks, enjoy festivals, etc. I think another part of why it was a gathering point…. although we wanted to witness history, somehow driving around neighborhoods and seeing lives uprooted isn’t anything we want to have any part of. Taking a few pictures from a busy street is far different from driving into neighborhoods where people are suffering to do sightseeing.

How is the weather there?

Honestly, Its been sunny & hot all week with the exception of a couple of hours Saturday morning. The humidity is horrible too!

Why are the newscasters wearing waders?

In my opinion, it makes for good TV. I’ve worn my regular shoes or sandals all but one day when I wore hiking boots & lived to regret it. Afterall, it’s hot & summer shoes rock! For people who have homes in flooded neighborhoods, waders came in handy trying to get things out if people didn’t evacuate early.

The water in the Mississippi is moving pretty well so other than the day I was near a fuel business, I haven’t smelled anything unusual…. though I should mention I smelled magnolia trees several times. In some of the smaller rivers, water is no longer flowing into the Mississippi. That stagnant water in a few places is a bit bothersome. There is stuff in the water that should be and for that reason I haven’t walked in it but plenty of others have. More than the smell I want to know mosquito abatement is in full swing. That’s a health concern too.