I am sure I’d still be nursing a Beltwide hangover if it weren’t for having something equally great on my calendar. (PS to be clear, the hangover wouldn’t be not from drinking so much as from enjoying the people….. That’s a high that makes recovery time important as you adjust to the normal day-to-day.)

However, I am headed to the American Farm Bureau Federation’s annual meeting. This is something you need to know more about. 🙂

A Gathering Farmers of All Kinds 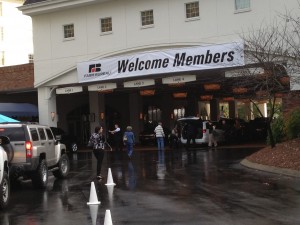 The Opryland Hotel is farmer central for the next four days as it houses the AFBF annual meeting!

The thing that I most enjoy about American Farm Bureau meetings is the incredible diversity of farms represented at the event. I have met farmers from probably every state and they grow so many crops that it makes my head spin.

Seriously, there are faces at this meeting that could be placed on all of the foods at my local grocery store. And to have a chance to talk with the even briefly is astonishing. I have gotten a chance to talk avocados, berries, crawfish, dairy, elk and so many more!

Some of the farmers are just starting their careers and others have already begun to turn the reins over to the next generation.

Some are carrying on a family tradition generations in the making and can trace their farming roots back to before the US began its bid for independence while others are establishing a brand new path, starting a way of life that has seemed foreign to family members.

Some farmers I will be sitting alongside live in major metro areas like New York and San Francisco with Starbucks on the corner nearby while others live in what we fondly refer to as “the middle of nowhere” and think a trip to any chain is a treat because those things are hours from home.

When the topic of production practices come up, it becomes immediately clear that the differences continue and similarities also pop up. With people using intercropping, conservation rotations or cover crops whether they choose to use biotechnology or are seeking organic certification.

The similarities among these farmers continue when you talk to them about their land, the care for the environment and the need to keep farming a viable part of the US. In fact many joined their local farm bureau because something was happening locally and they realized if farmers like them didn’t get active, they would be challenged significantly and their farms may be put in jeopardy.

For those reasons, farmers come to AFBF to get together and talk about what they need to do in the coming year.

Having described the farmers who attend and why, it may make you wonder what I will be doing at the meeting. I guess I have some ‘splaining to do.

With so many farmers gathered in one place, it’s a great chance for companies to be too. Monsanto will have a booth and I will be working it some of the time we are here. We have several things farmers are interested in as they look ahead to the 2013 season.

We will be talking drought tolerant corn technology, about our farm mom of the year campaign that puts a light on some of the incredible women who help feed our families and communities (this year it’s Debbie Lyons-Blythe), about programs that support rural communities and education.

This year we also have a few fun things to do at our booth. It’s especially going to be fun for social media peeps so I hope a lot make it by.

There are a couple of meetings that I will be sure to take in. First and foremost is the opening general session where AFBF President Bob Stallman will speak to some of the various things that are happening in 2013.

This talk is always a great chance to understand what the farmers in Farm Bureau find important and it serves as touchstone for the coming year and this year it will be live-streamed starting at 9:20 am tomorrow (Sunday).

Another session of interest to Monsanto is what is called an exhibitor seminar on drought-tolerance. A colleague will be talking about Monsanto’s efforts in drought tolerant corn as we introduce a product for the Western Corn Belt this year. That session will be in the exhibit hall at noon Sunday.

We will be starting our presentation at 3 pm Sunday in the Governor’s Ballroom C&D. I hope to see lots of faces familiar from avatars on various social media channels as well as to meet more fantastic farmers!

Did you say social media?

Yep, that’s a big part of what I will be doing here. I am one of a dozen bloggers who will blog for the Farm Bureau’s annual meeting site. That site http://farmbureau.wordpress.com will serve as a hub to communicate information about what is happening here to all the folks who had input through their county and state meetings. We will also be live tweeting quite a bit of the event using the #AFBF13 hashtag!

What questions do you have?

I will be glad to try and get answers!