As I went through a few files from my days in Mississippi, I came across a photo that I knew I would need to share for National Ag Day. The photo was an awareness piece done in March 2007 and showcased the rising world population as well as ag day. It was a fun play on the concept of living in cotton. 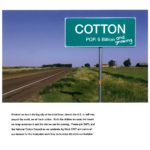 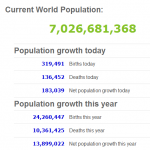 The project was something that we thought was a bit of fun. We made pocket-sized cards for various people in the cotton industry to have in hand as they went about their day-to-day. I remember handing them out at banks as I did business, stores as I paid for things I was buying, etc. This year, I’ve decided to make myself some personal social media business cards. I want to put my contact information on one side, and have a few different photos with facts on the other side.

What stands out for me though as I look at this today, is the fact that just 5 years ago, the population was six billion and growing. I remember going through the ideas. We talked about a lot of ideas before settling on the “living in cotton” concept with the “who would want to live in polyester line. The global population was still pretty close to 6 and yet here five years later the population has grown to more than 7 billion!

There is a calculator that shows the growing world population in real-time, I snapped this screenshot as I got ready to publish this post. By the time I wrote a few words here and went back to copy and paste the information, I found, growth had already added quite a few people. click on the image to see how its changed since I grabbed the screen shot! Check out the stats: 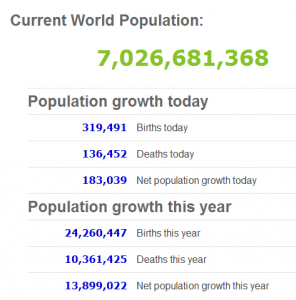 These growing numbers have a definite impact on agriculture in the United States and globally as farmers look to supply food for their communities. With that kind of population growth, we need to continue the productivity gains farmers have been making for the past few decades while also reducing the environmental footprint of each bushel or bale harvested. That’s the shared goal of virtually everyone I know in agriculture as we look to squeeze more crop from every drop of water and seek ways to produce more on the finite and precious soil.

As I’ve traveled beautiful off-the-beaten path locations in Asia particularly, I’ve noticed more people who have been able to improve their situation in life. As agricultural productivity grows, their lives improve. And as that happens, people are moving from a world where they may only have one or two pairs of clothes to having more. At the same time, myself and friends here in the U.S. are cutting back on consumerism and we are recycling more than ever before. Those changes in resource uses though, are not substantial enough to make up for the growing population and the increasing demand that comes with it.

All of that is Weighing on My Mind for “Ag Day”

A growing world population and fewer resources from which to meet demand for critical things like food…. That’s big stuff. But that’s the sort of big stuff that floats through a farmer’s mind as they make seed purchases for the coming year and consider whether the irrigation technology they have is “up to snuff.” I’m not sure where all I’ll be going or what all I’ll be doing on ag day, but I feel certain, I’ll have the chance to share some “thank a farmer” and “farmers rock” moments along the way. And yes, I’ll throw in a “we cotton to farmers” for good measure.

Hope you celebrate as well!