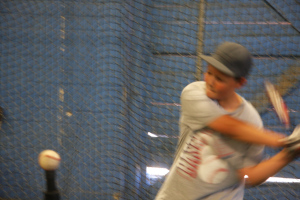 I have to tell you that my visit to Ray-Lin Dairy recently was shaped a lot by Ray’s son, 11-year-old Bryson (remember him from the Flat Stanley series?). It was the weekend so Bryson wasn’t at school. He was at home so he was having what sounded like a bit of a typical day in the life for him, but wasn’t at all typical for kids I know.

Well, I have to admit… that Bryson was enjoying doing some of the things that is familiar….. he slept in a bit, watched some early morning TV, worked on baseball at batting practice and seemed to delight in messing with his little sister. That all seems SO FAMILIAR! (No, I don’t go to batting practice and I mess with my sister a lot less than when I was 11 but I do have nephews). 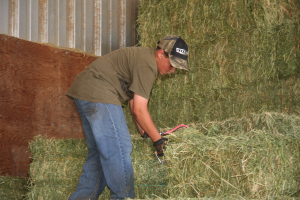 moving hay in the feed barn

Bryson was also doing the kind of thing that my nieces and nephews do, that I did as a kid… he was lending a hand. It just that lending a hand on a dairy farm can be pretty different than lending a hand at a small house in the city. When I got there, Bryson was dashing off to a shop to find and haul back a really long hose that needed to be run from the water source into one of the pens or corrals. One of the cows was “down” and time was of the essence. Bryson wasn’t totally sure what he needed to be doing some of the time because they don’t have the problem too often, so he was watching his dad to see how he could help and Ray gave him some tasks to do. That seemed familiar but the urgency created by a cow is depending on you seems to change the situation from when I’d help my dad by handing him a wrench while he worked on something.

After batting practice and lunch, Bryson took a relaxation break as Ray went back to giving me a tour and helping me understand the farm. When we were heading back from the manure ponds, Ray said we needed to go back to the feed barn to see how Bryson was doing. See, along the way with the phone calls, was one where Bryson was telling his dad he wanted to go untie bales of hay for feeding. It was a new chore that he was still learning so Ray wanted to be sure Bryson was remembering all the things to think through as he moved bales, got rid of the ties and dropped them to a place where the feed mixers could get it for mixing.

How did you lend a hand growing up? What sort of chores do kids in your family do? 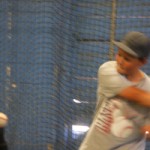 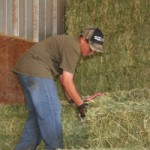 moving hay in the feed barn