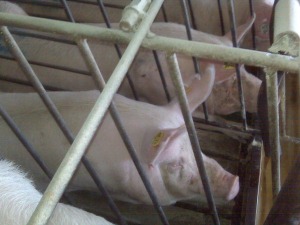 Mark's pigs warm inside & lined up to eat

Tonight, after I drove through freezing rain to get home, I just settled in on the sofa to relax before eating dinner. The fact that people who work with livestock on America’s family farms were getting a chance to speak to animal abuse and undercover videos. Kay Johnson Smith of the Animal Ag Alliance was on the show. A friend from Ohio, Joanna Kohnen, and I were watching the show in different states but chatting through instant messaging. We both felt like the show didn’t give livestock farmers a real chance to show what they do so well. So here are some of the images I have when I think of farms….

With the crummy weather we’re having across so much of the US, I can picture farmers and ranchers out doing chores in high winds and heavy snow. It was so bad last year on the Oklahoma ranch Becky McCray and her husband have, and a young calve was struggling so Bubby became the object of great concern in the social media world with people asking for regular updates. Becky was glad to share both photos and video through her flicker feed and Becky’s other social media efforts.

But the daily care of livestock isn’t always in such an extreme. Because of that, I went through and pulled up some other scenes that are much more the kind of video that represents the “factory farms” in the U.S. Afterall, the vast majority of US farms are family farms, even if they are larger than they were generations ago, families are still engaged.

Missouri farmer Chris Chinn did a great video to help me see how hog production works. The video shows how the pens work for the hogs and Chris talks about why they do what they do.Her blog also shows some of the farm’s day to day.

Our friend Will Gilmer at Gilmer Dairy Farm in Alabama posts videos frequently on the farm’s YouTube site and other information on the Gilmer Dairy Farm blog. One of his more recent posts shows his milking herd as New Year’s came in.

Ryan Goodman is a ranchhand from Arkansas (now in Tennessee for grad school) who has seen some of the video like shown today and he wants to be sure people can contact him on his AgricultureProud.com website or the I am Agriculture Proud Facebook page.

California dairyman Ray Prock hosted guests on his farm who shot this video so you and I could see it before visiting! He’s out here telling his story too on RayLinDairy.com.

At Haley Farms in Ohio, Mike doesn’t shoot a whole lot of video but this video sticks with me no matter how long its been since I have watched it. He’s got happy beef cattle.And I had a chance to see how much care they give cattle when I went to the NAILE one fall.

As Kay Johnson Smith said as the close of the program (Issues with Jane Velez-Mitchell):

We do not condone any animal abuse. I should say that first and foremost, farmers and ranchers take their jobs very seriously. This is not just a job, it is a lifestyle and they care very much for their animals. This is their livelihood and they are dedicated to the care and treatment of their animals.

She also made it clear that farms & ranchers have clear policies that direct employees to report any issues at the onset. They would not want problems to go unreported as some of the critics do for months at a time. Farmers want to be sure the right actions are taken immediately. When you see one animal abused, it should be reported to legal authorities, rather than watching abuse for months go on. The vast majority of farmers would act to stop abuse immediately if something was happening on their farm. That leads me back to my friend Joanna who has this to say tonight:

What I don’t understand about the piece is why Jane did not give Kay a real chance to explain anything. Rather than pointing out various practices she felt were questionable, she lumped them all together and expected Kay to rebuttal all of them within just a few seconds. It seems to me that rather than discussing why the Animal Ag Alliance was against the “Ag-Gag” bill, Jane seemed to just want to gag the representative. I hope most Americans would be interested in getting the other perspective, especially if they’ve been invited to participate.
Rather than jumping to conclusions, its easy to take a few extra seconds and learn about farms. The farms that farm families like mine have been working for generations are not represented by the farms shown during this segment. If you’d like to know where your food comes from and why farmers across not only America, but across the world have taken up specific practices, talk with us. There are so many farmers who are willing to talk, take a look at Youtube, Twitter, and Facebook! We all have something to say, so please give us a fair chance. Listen, learn, educate!
The images that were captured by the undercover cameramen were APPALLING! I was sickened to see animals being treated that way. Having grown up on a farm in a community where animal welfare is a focus point, I don’t understand how some people could do those things. I’m from an area where school doesn’t even start until after the county fair so that the kids participating in 4-H and FFA are able to show off their livestock projects with pride, after working with their animals for months. From a young age, we know where our food comes from, we respect the responsibility farmers shoulder, just as we respect our animals and most of us are excited to talk to it.

If you want to find more farmers, browse through the list of blogs I read and if you have questions or comments, please join the discussion!

0 shares
« Guys on #Pinterest? Do they need to turn in their “man cards?”
Stuck in the Middle or Gone Over the Edge? »