aka Two Farmers, Two Foodies and a Monsanto Employee Walk into a Restaurant 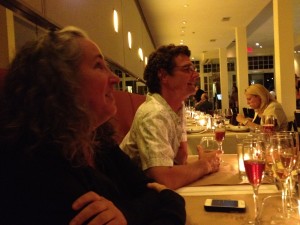 Some of my readers may know about a project called One Hundred Meals and some may not. But that project’s creators Ellen Malloy and Grant Kessler, were in St. Louis recently along with two of my dearest farmer friends — Mike Haley and Ray Prock. We planned for a friendly dinner on Wednesday night and a full day of tours on Thursday.

Ellen and Grant  are really into food. She knows chefs across the US and can tell you about their strengths in ways that make me daydream. Grant is a food photographer and takes photos that make your mouth water. Mike is the Ohio farmer who convinced me to go to my first livestock show and you may remember calling him a social media hero too. Ray is another of my brothers from other mothers and he showed me around my first ever dairy farm visit which was totally awesome. 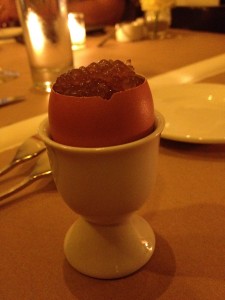 Maple Custard — I dream of this!

Although I am sure some people expected fireworks knowing some of Ellen’s thoughts about Monsanto, her post in which she said “So, as part of the One Hundred Meals project, Grant and I are field-tripping to Monsanto next week.Wait, the WHAT? I mean, really? MONSANTO? YES! We’ll be infiltrating enemy lines!!!!” may have made me flinch a time or two. But we were talking about  mutual respect (if not agreement on everything) and figured that along with the incredible food & a couple of farming friends, the night had to be great. That is indeed what happened!

We went to Niche. It is a restaurant created by Gerard Craft, one of the leading young chefs in the United States. And I have to tell you, the reputation is much deserved. Here is the list of incredible foods we had with the wines they paired with it (the menu changes regularly so check the website or just head straight there). On a few courses they gave Mike & Ray a beer pairing instead (yes, Ray the beer geek was thrilled 🙂 )

Just reading through that menu again makes my mouth water! Craft is the executive chef and Nate Hereford the chef de cuisine. The food was incredible! And the pairings with wine knocked my socks off. With food this awesome, we had plenty of common ground to talk about too (like how to get another of those custard, mushroom & caviar filled eggs!)

Craft has opened another restaurant much closer to my house — its called Pastaria and is in Clayton, which is where Niche will move November 1. I’m sure there are lots of places you can get all the low down on them, but there are some neat pieces at Sauce Magazine search for Craft.

Thanks so much to Ellen & Grant for the great excuse to get to one of the best restaurants I’ve EVER been to! I plan to make it back over, especially with them moving so nearby. And for others, call now and get reservations. You will be happy you did!